Posted on by Alice Schenk / Comments Off on Alive Again

Revivified in Island Park Story and Photos by Alice Schenk The sparkle of possibility shone upon the day as Wayne and I headed out on our rented snowmobile, which I had nicknamed Betsy. We were at Island Park
READ MORE

Posted on by Kris Millgate / Comments Off on Power Trip

Island Park is beautiful in the green season, but summer is short in this high land where winter reigns supreme. I’ve seen Island Park in peak bloom, but now I want to see it in peak gloom. That’s why I’m riding with the Fall River Electric Cooperative line crew in January. Continue reading →

Posted on by Michael Stubbs / Comments Off on Chasing Winter

It was February, and snow was hard to find—in Pocatello, anyway. Two weeks of temperatures in the fifties and sixties had stolen the white from the schoolyard and mountains and convinced my kids it was time for shorts.

But I was not convinced, and neither was my wife, Wendy. We shared our view with our three kids one evening and made a plan to find snow on President’s Day. We were going to put away our shorts and retrieve our sweaters and fleece. We were going to the woods. We were going to cross country ski. The kids agreed. When the day came, we packed the car with skis, boots, coats, kids, sled, and headed north in an attempt to recover winter and to make good use of the Idaho Park N’ Ski Pass we had purchased at the beginning of what looked like a promising season. Continue reading →

When our daughter married into the Stoddard clan and introduced us to present-day descendants, I soon realized a family of great storytellers had come into our midst. They were eager to share family escapades and adventures, but since she and her extended in-law family live in the Boise area and I’m in Blackfoot, not until the last four or five years did I realize their family is steeped in eastern Idaho history as well. To my surprise, I found that the site of the Stoddard Mill Pond in Island Park, about fifteen miles from our summer home, was once a thriving lumber enterprise owned for six generations by this same Stoddard family.

When the Stoddards gave up their lease in the early 1960s and moved the mill to St. Anthony, the site and the pond were reclaimed by the Caribou-Targhee National Forest, which recently restored it to its original depth of six feet and turned it into a kids’ fishing pond stocked with rainbow trout. Only children are allowed to fish the pond, and catch limits apply. It is an easy drive along Highway 20 north of Ashton toward Elk Creek Station, and then, about five miles down Yale-Kilgore road, a very small, high sign directs visitors to the pond, and I think it’s the perfect place for a kid to learn to fish. The pond is round and flat, with no shrubs lining its perimeter, so children can be taught to cast a line on calm water. Several picnic tables surround the sides where families can eat lunch, wait, or watch fledgling fishermen catch dinner. A floating dock and a fishing platform have been installed.

Plans of several Island Park groups include erecting a kiosk that will tell the history of the pond, but that hasn’t happened yet. Across the narrow road from the pond, three large concrete foundations remain from the mill site. About a hundred yards away from the pond in the fringe of trees that fronts the more dense forest is the former location of the mill camp and facilities.

Besides the pond, little remains to suggest the existence of the small Idaho town of Rea, where the mill was last located. But Larry Dalling, son of Alta Stoddard Low, brought the place alive for me with his animated narrative about living there during the summers as a young boy and teenager. His cousin, Ron Stoddard, has also told me many stories, as he was the last Stoddard to own the mill, whose history goes back more than 130 years. Continue reading →

In the creaky limbs of our family memories, a wide rectangle of gray canvas stretches between two tall and spindly lodgepole pines. It is a simple hammock, slung between the same two trees every year, just a few yards from the front porch of the cabin that my great-grandfather built in Island Park in the 1950s. He farmed potatoes in the summer around the tiny town of Teton, and drove a school bus in the winter. He built this cabin in the forest near the headwaters of the Henry’s Fork to make a family retreat for his three daughters and, over time, for their families. I am part of the fourth generation to come to the cabin. Over the two decades of my growing-up years, it was our family’s destination for every summer vacation, and the hammock was its emblem.

The cabin still stands now, some sixty years later, but most of us visit it much less frequently, as our lives have spread us in different directions and obligations across the map. The hammock is hung less often now, and it’s not even the same hammock, although no one knows when or how the original one finally succumbed to our weight, or if perhaps it just got misplaced when it was tucked away at the end of some summer season.
Continue reading →

Posted on by Kris Millgate / Comments Off on Grizzly 227

I’m dressed in my best camo, drinking a power smoothie, and out the door before the sun rises. A researcher’s hunch has it there’s a grizzly bear in a trap in Island Park and, after five years of asking, I finally get to go.

I walk more than I talk. I’d rather get something done than talk about getting something done. My action attitude is probably why I don’t have an official bucket list in writing, but if I did, touching a grizzly bear would be on the top of the list.
Continue reading →

The Moose and I 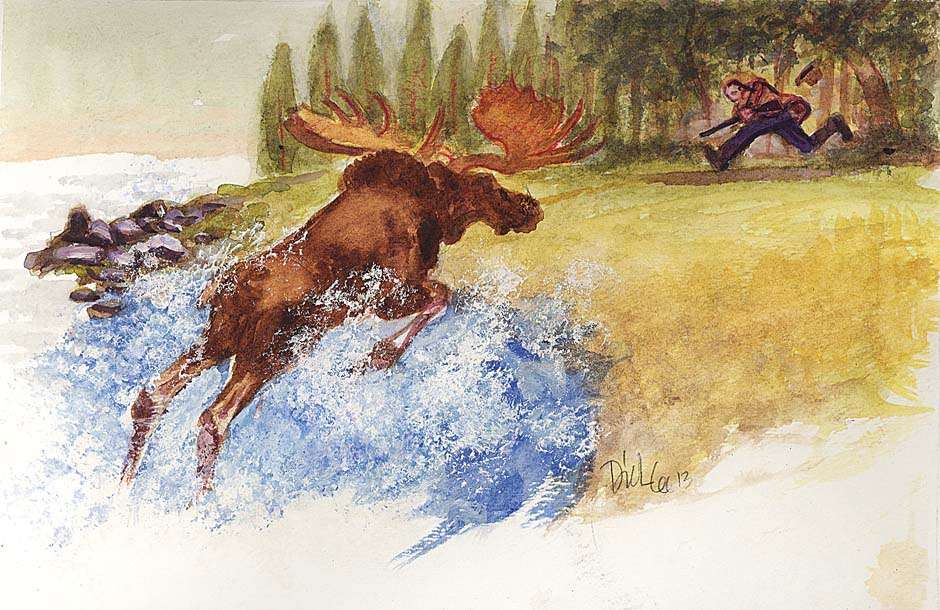 Posted on by Wallace J. Swenson / Comments Off on The Moose and I

A bead of sweat, born in the region of the youngster’s hairline, started its journey down. Stealthily, it crept across the furrowed skin of his forehead, wound its way through the roots of his eyebrow, and paused.

Aware of it, the young hunter concentrated harder on the peep sights of his Mossberg .22 rimfire target rifle. Held rock-steady, the front sight remained centered on the left eye of the fourteen-hundred-pound bull moose that stood chest deep in the water forty feet offshore. Continue reading →