A Train for a Plane

Posted on February 1, 2017 by Thornton Waite

The Locomotive of Test Area North

In the early 1980s, I worked for more than a year at Idaho National Laboratory (INL) near Arco in eastern Idaho, as an engineer supporting the LOFT (Loss-of-Fluid-Test) Program.

At the time, a locomotive designed for use in the nation’s nuclear reactor research program was running on special four-rail tracks. The history of that locomotive and its rail line is part of the history of both the INL and the Cold War era.

The railroad was used at a time when the United States Air Force was investigating the potential of a nuclear-powered airplane, in part because of reports that the Russians were building one. A large research effort known as the Aircraft Nuclear Propulsion Program (ANP) was funded to develop a nuclear-powered jet engine in the 1950s, and much of that research was performed at the newly established National Reactor Testing Site in eastern Idaho, known today as INL. A large airplane hangar, a fabrication facility, an engine test facility, and a “hot shop” building were all constructed to fabricate, test, repair, and evaluate nuclear-powered airplane jet engines at a special testing area known as TAN, or Test Area North, at the north end of the laboratory.

The test engines weighed several hundred tons, and were moved between the various buildings on the railroad line, which had four rails of the standard four-foot, eight-and-a-half-inch gauge. The test engines were on a flat car that straddled all four rails to distribute the weight, while the locomotive that moved them ran down the center two rails. A large turntable was designed to turn both the test engine and the locomotive so that the latter always was pushing the test equipment to a facility. Six rail lines, the longest of which was 1.5 miles long, went out from the turntable to the various facilities. 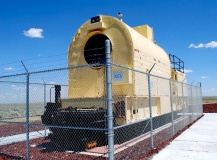 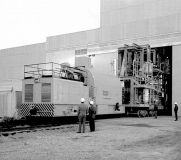 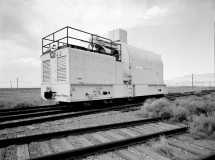 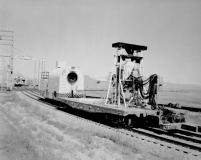 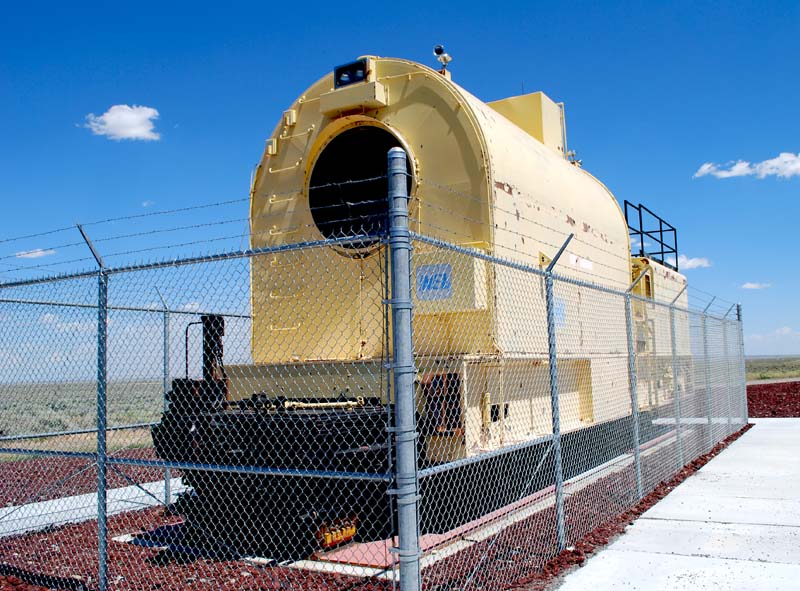 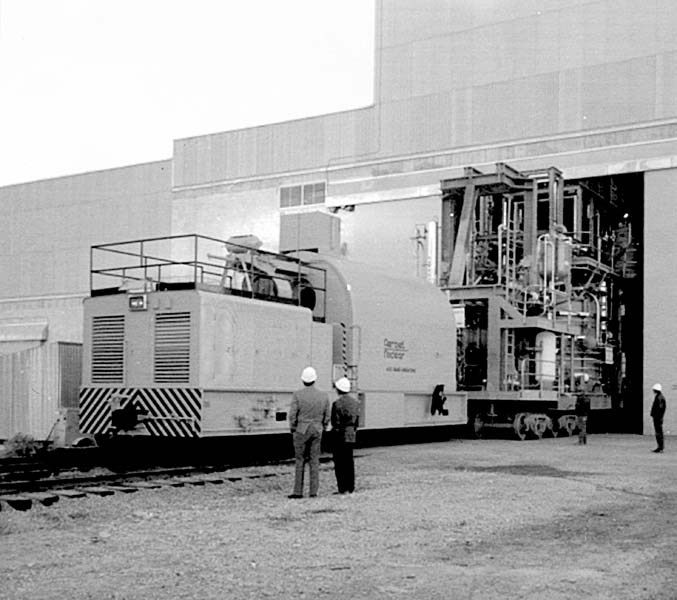 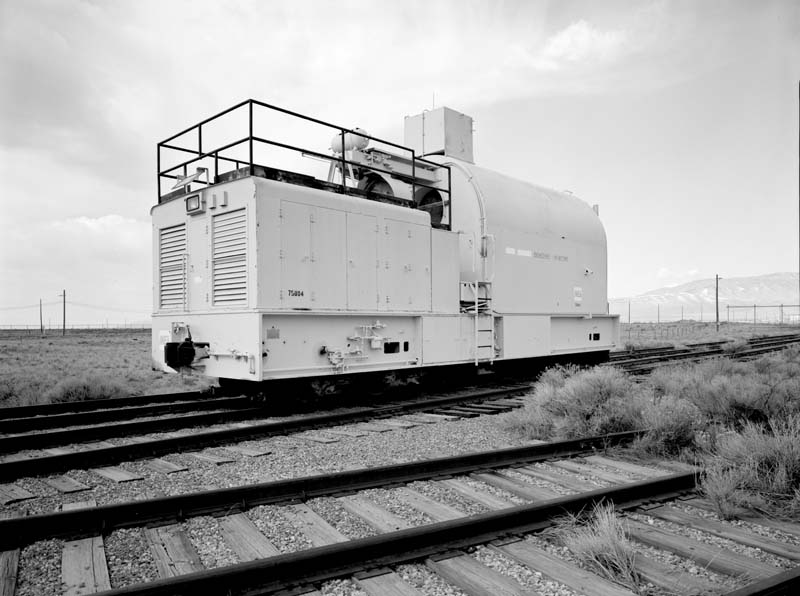 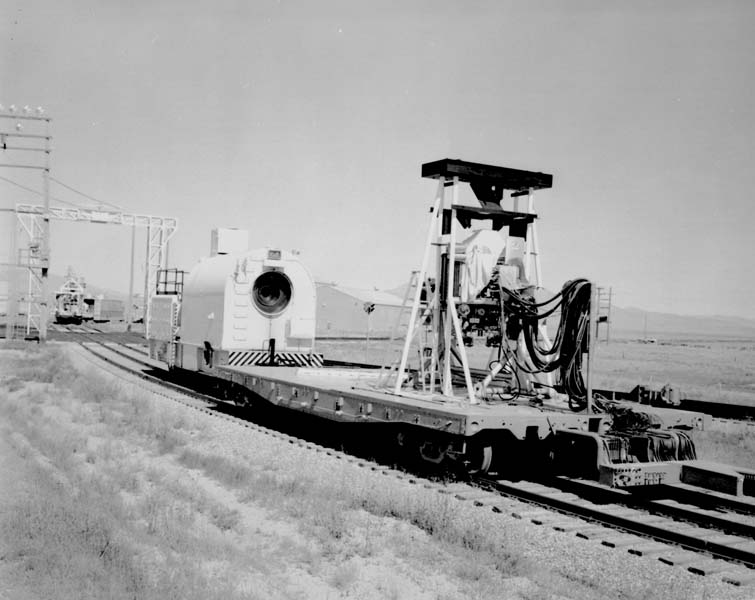 Built by General Electric in June 1954, the diesel locomotive had an unusual design and configuration, because of the potential for high radiation fields. Aside from its railroad wheels and standard couplers, it looked more like a giant mobile MRI scanner than a locomotive. It weighed 215 tons, yet was only forty-five feet long and generated just four hundred horsepower. In comparison, a modern diesel locomotive of that weight would probably be about seventy-five feet long and would generate four thousand horsepower. The TAN locomotive, painted yellow with black lettering, traveled at a maximum speed of 25 mph, although the normal speed was 5 mph when it was pushing a piece of test equipment.

Much of the extra weight it carried was shielding to protect the engineer from radiation from the airplane test engine. Several inches of lead and water were placed around the engineer’s cab in a semi-circular shell, which explains the locomotive’s unusual shape. Special lead glass ports on both ends of the cab enabled the engineer to see what he was moving and where he was going. The air in the cab was heated and filtered to remove any airborne radioactive particles. Redundant controls and equipment were installed so the locomotive could be operated in the event of an equipment malfunction.

In 1961, the nuclear airplane engine program was abruptly canceled, after which the railroad played a transportation role in the testing of nuclear reactors for the space program. Once again, it moved equipment between the test area and the fabrication and hot shops.

When the nuclear industry began supporting a test program in the 1960s to subject a nuclear reactor to accident conditions, a small-scale nuclear reactor was built on a railroad car at the TAN fabrication facilities. Once more, the railroad car spanned the four rails and the locomotive moved the reactor between fabrication shops and the test reactor containment vessel. These tests were successfully completed in the 1980s, and in the following decade the testing area was razed, although the airplane hangar remains in use for another program. The railroad was removed and the turntable filled in, but the locomotive, still painted yellow, was preserved. In 2006, it was trucked from TAN to the Experimental Breeder Reactor No. 1 (ERB-1) Atomic Museum near Arco, where it now stands as one of the country’s most unusual locomotives on public display.

The museum, located fifty miles west of Idaho Falls and eighteen miles east of Arco on U.S. Highway 20/26, on the INL property, also contains two of the original plane nuclear reactors and the EBR-1 reactor, the world’s first power plant to generate electricity using atomic energy—an event that took place in 1951. The museum is open only in summer months, but the experimental airplane reactors and the locomotive can be seen year-round. A description of the railroad and photos of the locomotive in service have been preserved as part of the Historic American Engineering Record of the National Park Service.

Thornton Waite lives in Idaho Falls with his wife Susan and has two married daughters. He recently retired from the Idaho National Laboratory, where he was a project manager. His interest in trains has led him to write several books and numerous articles on the growth and development of railroads.
View all posts by Thornton Waite →
ORDER BY MAIL