Posted on by Loy Ann Bell

I spotted the creeping car before it pulled into our farm driveway. A pleasant-looking young woman slowly climbed out, looked at my pinto mare grazing in the pasture, and started up the walk. On that summer day in 1952, I had no idea that this young woman would change my life forever.

“My name is Ina Hadam,” she said when I answered the door. “You rode in the Jerome Rodeo Parade last week, didn’t you?”

“I recognized your horse. I’d like to start a girls’ 4-H horse club. Would you be interested in participating?”

Would I! My face must have revealed my excitement, because she grinned.

“Let’s talk to your folks,” she suggested, and I ushered her into the house.

That 4-H club fostered some of the fiercest competitions in which I’ve ever participated. Every meeting, we members compared notes about what we’d taught our poor guinea pig horses. They learned to horse laugh, count (by pawing), pull a saddle blanket off their backs, bow, be ridden Roman style (standing on the horses’ backs) and, of course, allow us to perform “under saddle.”  We took turns at winning the title of Jerome Rodeo Queen and one of us, Karen Lavens James, became Miss Rodeo America. I thought we were as wild and woolly as a bunch of girls could get—that is, until I stumbled onto the story of an Idaho world champion rodeoing couple, Hugh and Mabel Strickland, who lived during the early 1900s.

Born on a Bruneau ranch in 1888, Hugh (a.k.a. Hugo) Strickland went to work in his early teens for Kittie Wilkins, the “Horse Queen” from Glenns Ferry [see “Queen of Horses, Part I,” by Philip A. Homan, IDAHO magazine, October 2008 and “Part II”, December 2008]. Kittie provided a steady stream of unbroken horses with which Hugh could practice his bronc riding, and he became an exceptionally good cowboy. Later, he began competing at rodeos in bronc riding and calf roping, and in 1916 he won the saddle bronc riding at Cheyenne Frontier Days, one of the biggest shows in the nation.

When he returned to Cheyenne two years later, the most significant event of his life occurred. He noticed a cowgirl named Mabel Delong. At five-feet-four and 112 pounds, she was petite and striking. Her facial features were delicate, her dark hair always done in an attractive style, and her fashionable western clothing fit perfectly, enhancing her curvaceous figure. She looked to him like a Follies beauty, and she possessed a natural charm, but she could also ride and rope extremely well, which impressed Hugh immensely. 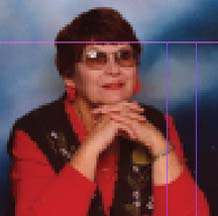 Loy Ann Bell lives in Jerome. Her articles have been published in horse magazines in the US and England. She’s currently completing a mystery, The Horse She Rode Out On, and compiling a short story anthology, Stories with a Western Flavor. She’s also working on a nonfiction book, Personalities and Events of Idaho.
View all posts by Loy Ann Bell →
ORDER BY MAIL