Posted on by Ross V. Walker

I’ve been camping with the same two friends, Bruce Gregory and Stephen Johnson, for thirty-five years in a row, and now that they are in California and I am in Idaho, we keep in touch daily by email. We are all interested in American history, and a few years ago one of them sent me an article he had found about mysterious giant arrows.

Since then, we all have been looking for them, and I have photographed nine, including three in Idaho.

You might come across one of these giant, concrete arrows in a field, or a ghost town, or maybe at a rural Idaho airport. Or spot one on Google Earth. They’re scattered across the country, but most of them are found here in the West. Why were they made?

Imagine what it must have been like to be one of the first airmail pilots, crossing Idaho in a primitive Swallow biplane owned by Varney Air Lines of Boise. Walter Varney had the contract to fly the airmail route between Pasco, Washington, and Elko, Nevada, with a stop in Boise. The route started in 1926 and was called CAM-5 (Contract Air Mail Route 5). In those days, planes had no radar or other electronic navigation aids, so pilots were pretty much on their own to figure out their routes using landmarks.

In 1924, the Postal Service had started building a nationwide system of navigation aids for airmail routes. The Department of Commerce took over in 1926, and continued building these aids until 1929, including many in Idaho for the new CAM-5 Route. This system included beacons on towers placed on concrete foundations shaped like giant arrows and painted yellow. Each arrow had a square in the middle for the tower and a rectangle in the back for a beacon control room. They were constructed about ten miles apart. The pilots could see the red or green beacon from a distance, fly over it from the tail of the arrow, and look down to see where the arrow was pointing so they could fly to the next beacon. A system of emergency airfields was built along the routes about every twenty-five miles.

Over time, Varney Air Lines merged with other companies to become United Airlines. Aircraft improved, and by 1933 Varney was flying Boeing 247 airplanes. More air routes were added, including one across Idaho to Salt Lake City. Finally, modern navigation equipment made the beacons and arrows obsolete. During World War II, most of the beacons and towers were dismantled and the steel used in the war effort, but a few can still be found across the state, usually at rural airports. Many arrows were left in place, but largely were forgotten.

In Idaho, arrows can still be found in varying states of disrepair. Many aren’t much more than concrete remnants. I found the first of the three I’ve photographed so far through an Internet search, which turned up the location of Strevell, but no photos. With another friend, Bill Parslow, I went to the ghost town, which lies south of Malta about a mile north of the Utah border. I found the arrow at the old site of one of the emergency airfields, which no longer exists. East of Boise, I later found another arrow that someone had painted orange. The big prize so far was a nearly complete arrow, its beacon and control shack intact, which I came upon at the airport in Dubois. I have heard that this is one of only two complete beacon systems still in their original locations.

So, if you are out for a hike and discover the remains of a giant concrete arrow, now you will know that you have found a part of Idaho’s early aviation history. 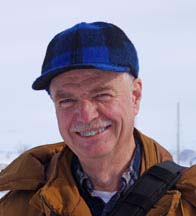