Posted on by Jo Deurbrouck

This is a story about a hand-carved redwood sign, Idaho’s backcountry aviation history, and an unusually curious man named Richard Holm Jr.

The sign stood in the huge open flat of Chamberlain Basin, in what was then called the Idaho Primitive Area and is now the Frank Church–River of No Return Wilderness. Chamberlain Basin’s popular airstrip made it into that counterintuitive Frank Church phenomenon, a trailhead located not at the perimeter, but smack in the middle of huge wilderness. The sign had been commissioned by Chamberlain’s then district ranger, Earl Dodds, whose fire control officer, a guy named Jack Higby, built it in 1961. When Jack was finished, the sign measured ten feet wide and seven high, too big to fit into a small plane. It was flown in pieces into Chamberlain, mounted onto huge posts that had been cut and cured onsite, and roofed with lodgepole shingles. It was built to last a century.

The front of the sign consisted mostly of a hand-carved, hand-painted area map. Local lakes were puddles of blue, streams were blue veins, trails were dashed black lines. The back of the sign, where the Forest Service intended to put public bulletins, was decorated with campy, hand-painted human figures. Largest and in the foreground stood a bare-chested Nez Perce man. Behind and below him, a packer led his pack string, a prospector swung his pick, a mounted soldier rode at full gallop. Above all of their heads arced a biplane.

Surely that sign exists today in thousands of old photos, rearing up behind grinning hikers, hunters, and aviators, its cylindrical legs wreathed in meadow grasses or half-buried in snow. Where it doesn’t exist anymore is in Chamberlain Basin.

In 1964, three years after Jack Higby built that sign, the word “wilderness” received a new definition: Congress said wilderness would be a place where “the earth and its community of life are untrammeled by man, where man himself is a visitor who does not remain.” Management agencies charged with caretaking our wildernesses—the Forest Service in the case of the Frank Church—would maintain this “untrammeled” state and, where necessary, create it. 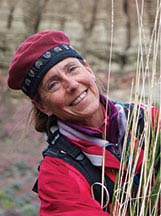 Jo Deurbrouck is a former Idaho river guide and author of the award-winning book, Anything Worth Doing. She lives in Idaho Falls.
View all posts by Jo Deurbrouck →