A Quiet Stage for the Drama of Ranching

I drive north four-and-half miles on Highway 93, the only paved road from Salmon, until I reach the Lemhi County community of Carmen. In 2015, its population is an estimated 392, and almost every corner seems to hold a house, yet the community is still secluded enough to provide plenty of space between the homes. Most of them are situated behind trees or down dirt roads, creating the illusion that Carmen is empty, maybe even uninhabited. The neighbors keep to themselves in this quiet place, yet they welcome newcomers with open arms. The residences extend along the highway, known locally as the Big Flat, which looks just like its nickname until the land reaches the hillsides and the cliffs, used long ago as buffalo jumps by the people of Sacajawea, the Lemhi Shoshone, also known as Agni Dika (Salmon Eaters). Buffalo jumps were cliffs over which tribal members would drive the animals, while others waited below with bows and spears. Nowadays, the cliffs are much admired by tourists and by residents like me, who drive past them often.

The majestic mountains and wide ranges of this region are at their best in Carmen, as the road leads past private lanes in a landscape where mountaintops touch the clouds, and where cowboys herd cattle from horseback on ranches that extend to the horizon. The highway begins to follow the twists of the Salmon River’s Middle Fork, heading toward Tower Rock and then to the river’s North Fork. The sun rises, hitting the cliffs to awaken whitetail deer, antelope, cattle, and many other animals. When the sun is high, ranchers irrigate in the summer, feed their livestock in the winter, and each day when the sun sets, the Bitterroot Range and Freeman Peak turn vibrant pink until the moon once again shines against the snow.

Rich family histories flow through the Big Flat, just as Carmen Creek does. Around here, many of the dirt roads, such as Archie Lane, are named after early settlers. Although the highway is now nicely paved and lined with fencing of poles and hand-driven posts, it was once dirt as well, and seldom traveled. Exactly when the area was first settled by whites is uncertain, but it’s thought to have been around the turn of the 20th Century. One family who came this way more than ninety years ago was the McFarlands. On Christmas Eve of 1924, amid deep snow and temperatures well below freezing, Pete McFarland, his wife Gudrun, and their children, Katie, Harold, Mary and Glen traveled from Salmon by sleigh to Carmen Creek.

They were heading eleven miles north of Salmon, to a ranch that Pete had bought while on a business trip. It was a joint purchase with Jude and Elizabeth Johannesen, and  the hefty price for those days was $88,000. That included all farm machinery, saddles, wagons, 2,642 sheep, one stallion, forty-four head of grade horses, twenty-three head of grade cattle, eleven head of hogs, all poultry on the premises, eight hundred tons of hay, seven hundred and fifty bushels of grain, and all range rights. 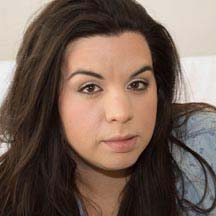 Annette Lewis is a twenty-nine-year-old mom and wife who lives in Salmon. She works for the Recorder Herald as a writer, photographer, and ad designer and runs her own company, Bellanet Photography. She loves to play cars and monsters with her two-year-old son and explore cities in Idaho and Montana with her husband.
View all posts by Annette Lewis →
ORDER BY MAIL