Posted on by Melinda Stiles

Of the Idaho Kind

Two a.m. Thump, crash, clatter, on the back deck.

“What was that?” I asked my husband Tom, as though he’d have a better idea than I in our sleep-snarled state.

The light revealed our substantial propane grill on its side. On the glass pane of the door, the light illuminated prints of a greasy nose and paws. As we slept, a bear had been peering into our house in the woods north of Salmon. Standing on his hind legs. Gulp.

At first light, coffee mugs in hand, we inspected the area. Broken branches in the orchard and a pile of appled scat showed the bear’s route to the grill.

As I walked to the barn for chores that morning, my eyes did a 180-degree scan. I peeked through an opening between the doors before I swung them open. All appeared normal. Our horses Sam and Rusty waited patiently for their hay. The barn cats were gathered at their dish. When I opened the door, no bear surprised me. But he had knocked over the galvanized garbage can and made off with a just-purchased twenty-five-pound bag of cat food.

“Sorry, cats. It’s mice for you until I get to the store.”

Later that day, Tom found the shredded bag at the creek, not a kibble left. I envisioned our friend hauling the bag to the creek, sitting down, maybe dangling his feet in the water, tossing back paws full of fish-flavored cat chow. I was almost charmed, though slightly annoyed at having to take another trip into town. Cat food storage plan B was in order. Our barn housed a solid, old-fashioned box freezer with a heavy lid. Perfect place for the food.

When I peeked into the barn the next morning, things didn’t look quite so normal. The freezer had been moved to the middle of the barn and was on its side with the top open and, of course, not a kibble to be found.

It was time to call Fish and Game. We were advised that our bear was associating our property with food and would most likely continue to get himself into trouble. The Fish and Game people brought out a trap on a trailer, backed it into our barnyard and baited it with heaps of food. The plan was to relocate our friend high up in the Continental Divide, where everyone hoped he would stay out of trouble.

The next morning, the trap door was closed and I met our bear face-to-face. He was at the far end of the trap, looking mild-mannered and scared. I liked my vision of him at the creek far better. He never made a sound as we waited for the Fish and Game officers to retrieve him. I stayed with him and thanked him for the laughs and the adventure, admonishing him to avoid the likes of us in the future.

On a sunny November afternoon, Tom, our dog, and I walked up to the pines on our property near the creek. Natives know to get out and savor the days before winter sets in. Our cocker spaniel Shirley put her nose to the ground and circled, her tail a blur.

“She’s on to something.”

Shirley disappeared in the pines and we continued toward the creek, checking the ground for bird tracks. I looked up in time to see something massive headed our way—a bull moose with a dog barking at its heels. 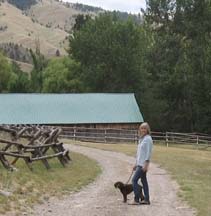 Melinda Stiles taught high school English in Wisconsin and Michigan, but after a trip to Idaho, she knew she’d have to retire here. She did, and now can’t imagine a better place to live, write, read, walk, hike, ride horses, and share with visitors.
View all posts by Melinda Stiles →