On Marriage and Long-Distance Biking

“I need to stop!” Ginny yelled at me from behind. “I have to fix my seat again. It’s just too painful!” This was only day two of our first long-distance bicycling trip together, which would extend 320 miles from Powell Ranger Station just west of the Montana border on Highway 12 to Hells Canyon northwest of Cambridge. She was uncomfortable. I was impatient. Heat, lack of sleep, and a shortage of calories are the nemeses of bike travel, and each was a contributor to this crisis. Stopped on the shoulder along Highway 95 just south of Grangeville, we were at the base of White Bird Hill. Angry, I wondered if we were going to make it another two days. I resisted the urge to ride on—alone. Leave her there.

It was already 1 p.m., the temperature was in the nineties and the second big climb of the day was approaching. “How many times are we going to have to stop?” I whispered to myself. In reality a much larger question loomed: was it possible that something as simple as a bike tour could derail an otherwise wonderful marriage? Perhaps I was being too dramatic. After all, it was just a bike ride. But those of us who ride know that touring on a bicycle is not “just” a bike ride. Tours are very hard on relationships.

Adding to this drama was what lay in front of us these next few days. Traveling through this part of Idaho, over routes traversed for centuries by Native Americans, followed much later by explorers, pioneers, and miners, would be formidable. Comprising three beautiful, yet uncompromising river valleys—the Clearwater, Salmon, and Snake—our hot, dry, August journey was far from easy. And much was at stake, for we both loved cycling and if we were not compatible on this trip, our future—a future of which bike touring was to be an integral part—could be in jeopardy. When we finally resumed riding, I remembered a remark spoken by someone in my past: “If you want a divorce, buy a tandem.” I always smiled when I thought of this phrase, never actually taking it seriously, but I did now. We would need to work together on this trip, I told myself. After all, it was our twenty-fifth wedding anniversary. 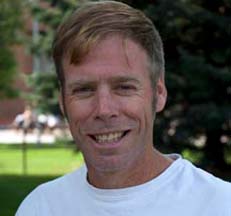 Thomas Sullivan is an adjunct professor in the Department of Geography at the University of Montana in Missoula. His research specializes in the study of landscape and how people interact with place. Thomas is an avid bicyclist (he does not own a car) and loves riding the trails and byways of the American West. Much of his life has been spent backpacking, hiking, and biking in what he considers his home place of western Montana and northern and central Idaho.
View all posts by Thomas Sullivan →
ORDER BY MAIL