Posted on by Reed Hollinshead

When Bad Luck and Trouble Came Looking for Idaho

Twenty years ago, Mother Nature unleashed one natural disaster after the next, all over Idaho.

I remember this sequence well, because as an employee of the Idaho Transportation Department (ITD), I helped prepare for a visit from then-President Bill Clinton in connection with flooding up north and the release of federal funds through a disaster declaration.

But the string of devastation was much longer than that, and in looking through the department’s archives recently I saw that the passage of time had dulled my remembrance of the impact of these events. I began piecing together the sequence of natural disasters two decades ago, chronicled in many photographs, including the ones on these pages. As I looked at the images, those events came back into focus. This inspired me to talk to people who were there at the time, to assemble the story of a very unlucky period in Idaho’s history.

The problems began late in 1995 with a landslide in north-central Idaho that closed U.S. Highway 12. Then came blizzards in southeastern Idaho and eastern Idaho in January 1996. Most damaging of all, extensive flooding came to northern Idaho a month later, fueled by warm temperatures and rain.

The Highway 12 disaster began with torrential rains, landslides, and blocked culverts that overwhelmed the small Noseeum Creek, a tributary of the Lochsa River, causing a massive washout and dumping tons of water and debris across the road. The river eventually covered the highway for nearly a half-mile upstream. The road reopened on Dec. 23, twenty-five days after the first washout.[/private]

Blizzards in late January 1996 closed many roads in eastern Idaho. A storm that began to roll across the state on January 26 lasted through the weekend, depositing up to twelve inches of snow. But the real challenge was the wind, sustained in many areas at thirty to forty mph with gusts up to seventy mph.

While snowstorms do not cause the long-term damage to highways that floodwaters do, they can shut them down just as fast and tax the personnel and resources of crews charged with keeping them clear.  About 4,500 hours of labor and more than 25,000 gallons of fuel were required by ITD to combat the effects of the storms, which caused nine-foot-high drifts and zero visibility, at one point closing almost every road in southeastern Idaho.

“There was about a ten-day period where our plows never stopped — they worked 24/7 and we emptied out the office spaces to drive some of the shifts,” said Ed Bala, now ITD’s district engineer in southeastern Idaho and then a resident engineer in the Rigby office. “I remember lots of stories of digging cars and trucks out of the big drifts on U.S. 20 west of Idaho Falls.” 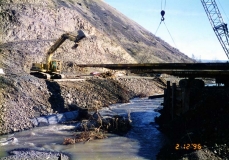 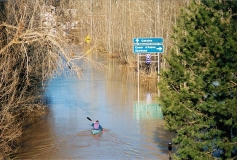 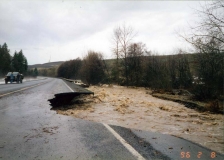 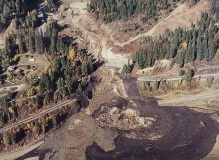 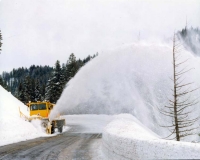 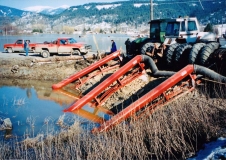 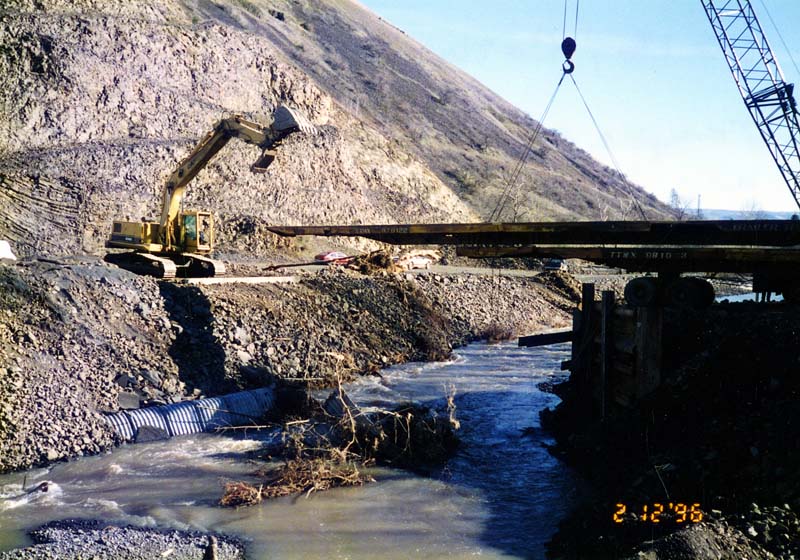 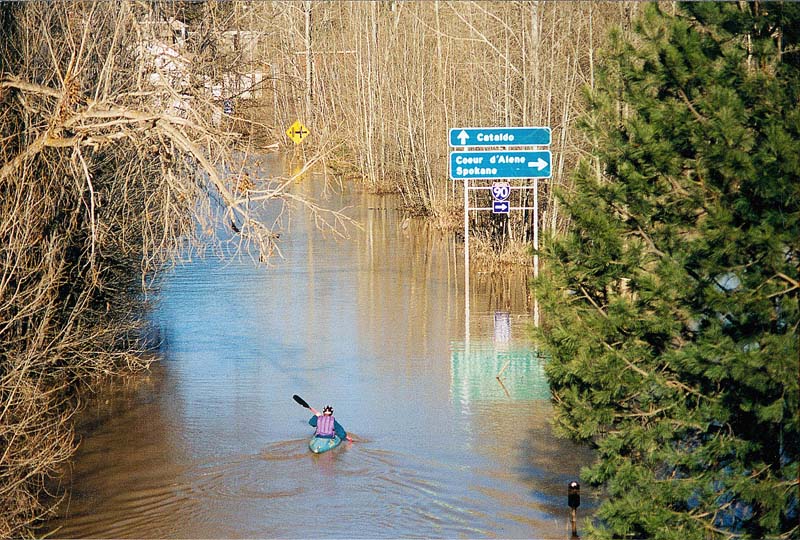 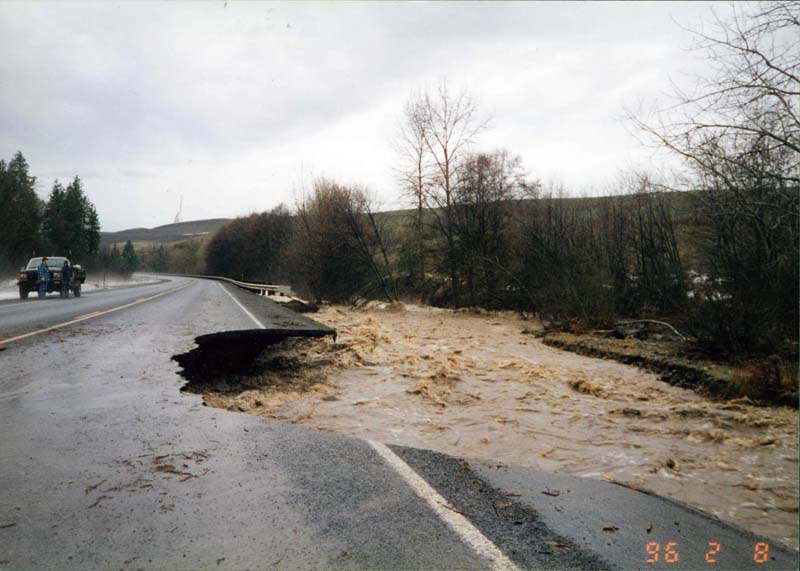 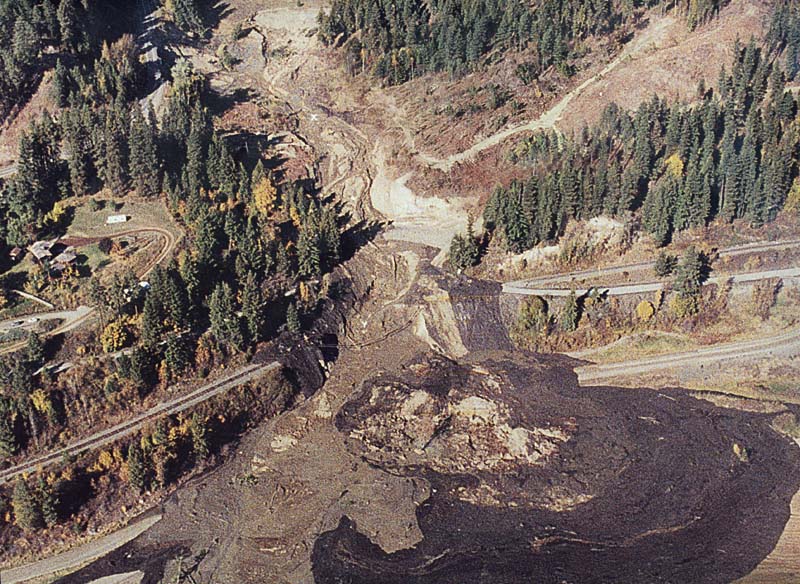 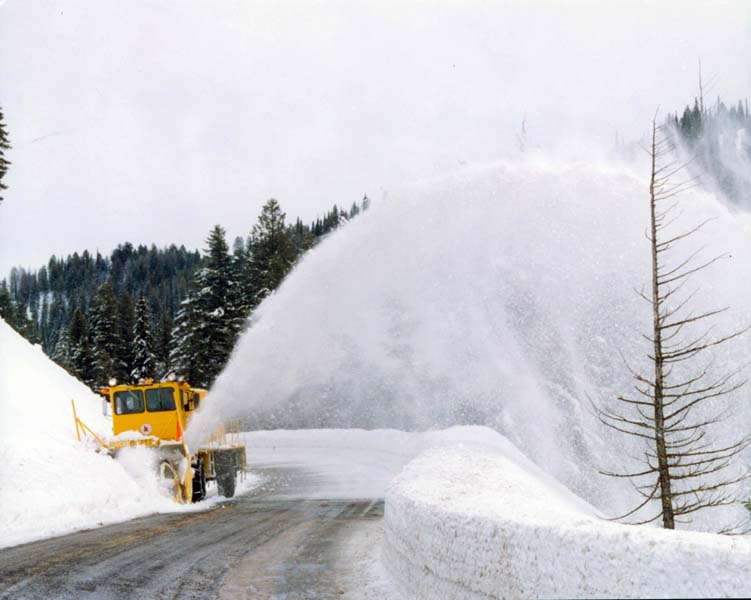 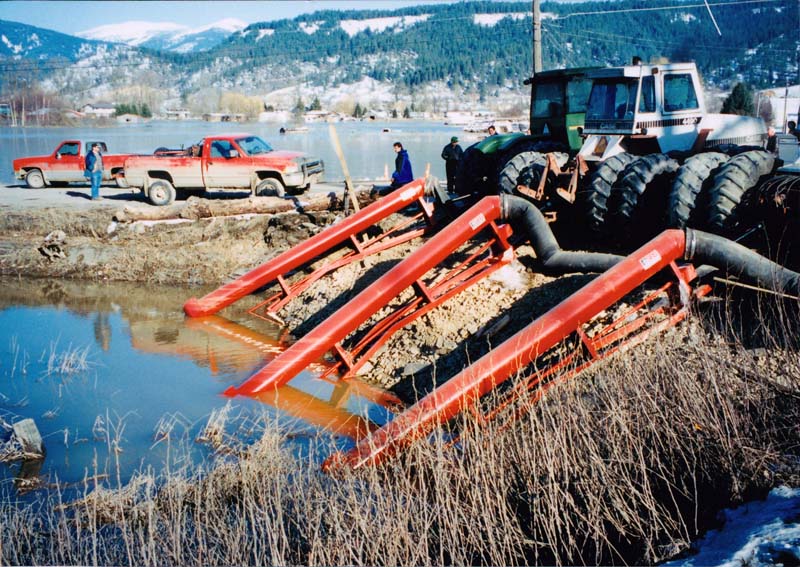 In February 1996, roads damaged by flooding in northern Idaho extended far beyond the state highway system. Thirteen state routes had a total of twenty-two closures, although by late February, all roads were open again.

Scott Stokes, now ITD’s deputy chief, had just been promoted to district engineer overseeing the northern Idaho region. “My first day on the job was a tour of the district,” he told me. “Water was over I-90 in Cataldo, Highway 3 was washed out in St. Maries, and U.S. 2 had turned to mud west of Sandpoint. It was a district-wide mess.”

The trouble started on Feb 7, when water levels began rising as snow melted quickly and rain fell. By the next day, serious flooding had begun. Fourth of July Pass was in danger of losing both westbound lanes. After debris was cleared and runoff water diverted, repairs were made to the road surface and subgrade, keeping traffic flowing on Interstate 90. Other highways did not fare as well.

In Bonner County, torrential rains caused enormous amounts of runoff to pool across U.S. 2 at Dover. Nearly four feet of standing water covered the road, overwhelming the drainage capabilities of the highway.

Perhaps the hardest hit area was St. Maries. The St. Joe River rose so fast that it breached the dikes, covered Highway 3 and flooded most of the area north of town. At one point, the highway was under more than twenty feet of water. While the dikes did not hold, the railroad bed along the highway did, acting as a dike to keep the water from draining off the highway. A 525-foot-long, twelve-foot-deep section of Idaho 3 washed away.

The Burlington-Northern and Union Pacific Railroad tore out its own track and cut a trench in the track ballast, allowing tens of thousands of gallons of water to drain off the road—and in the process taking themselves out of business for a short time.

The district also worked closely with the U.S. Army Corps of Engineers to repair the dikes and Idaho 3 was opened to traffic. Huge pumps operated on a twenty-four-hour basis to drain St. Maries.

“We were declared a disaster area,” recalled Scotty Fellom, then the district’s supply operations supervisor and now its administrative manager. “It enabled us to get special funding to assist with the cleanup and stabilization. We even flew in a soils and terrain specialist from Colorado.”

When floodwater collapsed the bridge on U.S. 12 at Cottonwood Creek, an old solution solved the new problem: a temporary bridge composed of flatbed railroad cars was established just south of the missing bridge to maintain transport on the crucial commercial route. The strategy had been employed in five other projects since 1987, although this was the first time that railroads cars had been used in an emergency situation.

“The bridge stayed in place for some several months without any complications,” said Jim Carpenter, then the district engineer and now ITD’s chief operations officer.  “Matt Farrar (now ITD’s state bridge engineer) did a lot of the bridge work on this and was instrumental in developing the plan.”

Northern Idahoans had barely caught their breath from these events when the winter of 1996 hit with a vengeance in mid-November—what became known as lce Storm ‘96. More than two feet of snow fell in a twenty-four-hour period. Weakened by rain and frequent cycles of freezing and thawing, the water-soaked ground began to give way, causing numerous mudslides on U.S. 95, Highway 57, Highway 97, and other roads.

The following June, the Snake River broke over its banks throughout southeastern Idaho, washing out bridges, levees, and many acres of farmland. In eastern Idaho, disastrous spring flooding from March 14 to June 30 was primarily due to the rapid melt of a record-high snowpack at high elevations. Heavy rains also fell in late May and early June, prompting a federal disaster declaration for eight counties. Interstate 15 was closed for nearly twenty miles between Shelley and Blackfoot. About fifty thousand acres were affected by the eastern Idaho floods.

Around that same time, a mudslide hit Bonners Ferry near the golf course. A wall of mud six to ten feet deep hit one car broadside and moved it a hundred yards down the course. The driver sustained serious injuries, yet crawled out of the car and back to the highway through the thick mess to flag down help.

Then came the Bonners Ferry landslide of 1998, which closed U.S. 95 for thirteen days.

A landslide in February sent an estimated one hundred thousand tons of material down the hillside, closing State Highway 14 and cutting off power to Elk City. It was a reminder that the next disaster may well be just around the corner—but I also believe that when it arrives, Idahoans once again will come together and rise to the occasion.[/private] 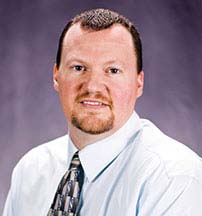 Reed Hollinshead is in his eighth year in the communication office at the Idaho Transportation Department, after a nine-year-term with ITD in the 1990s. Hollinshead, an Alaska native, lives in Boise with his wife of fourteen years, Kandle, and their two children. He has won numerous writing awards.
View all posts by Reed Hollinshead →
ORDER BY MAIL