The City of Helping Hands
Becomes a Crossroads to Recreation

In 1970, my parents bought a property in the Wagon Wheel subdivision about four miles from Donnelly by road and a half-mile straight up Boulder Creek. With no full-time residents, the roads were not plowed in the winter, although a parking area on Loomis Lane was plowed just off the old highway. When we went to the cabin on weekends and holidays, we had to cross-country ski or snowmobile in. We would haul the sleds up with us and go into the cabin. We had an old ‘40s car hood with a board across the end to haul groceries, bags, presents, water, and fuel in for the weekend.

The power lines extended across Boulder Creek and the power went out often. The first winter, we decided to put a wood stove in, as the house was all-electric. We hauled in the stove and all the parts and tools on the snowmobiles, using the sled. It had snowed enough by that time that my dad handed the parts of the chimney up to his friend, who hooked up everything on the roof. To this day, the wood stove, propane and oil lanterns, candles, flashlights, and extra water in jugs are kept for the not-so-often but still occasional power outages that are part of rural life. 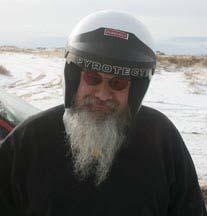 Carl Somerton is a longtime sports car enthusiast, promoter, and racer in the southern Idaho area who currently lives in Garden City, reads avidly, and has been a judge of the IDAHO magazine Fiction Contest for years.
View all posts by Carl Somerton →
ORDER BY MAIL