Posted on by Janie Veltkamp

A Bionic Beak for a Bald Eagle

In 2007 I flew home to northern Idaho from an Alaskan vacation with an unexpected companion in tow. In the cargo hold of the aircraft was an adult bald eagle, named Beauty by her Alaskan rescuers. I had met Beauty at an Anchorage wildlife center where she had been treated after being shot in the face by a poacher’s bullet and left for dead. Her entire upper beak had been demolished. She could not eat without human help, let alone return to the wild. When I arrived, the wildlife center was running out of space to keep her, and Beauty was running out of options.

As a raptor biologist who had rescued and released many wild raptors through the nonprofit I direct, Birds of Prey Northwest in northern Idaho, I knew Beauty’s future looked grim, even hopeless. My nursing background recalled the use of prosthetic attachments for humans—why not for an American bald eagle? This special patient had been fed with forceps at the Alaskan center and was tolerant and trusting of the humans helping her. That was one of the main reasons I took on her case. Beauty possessed the temperament necessary for the many dental impressions, measurements, X-rays, tests, and fittings that I would have to subject her to. 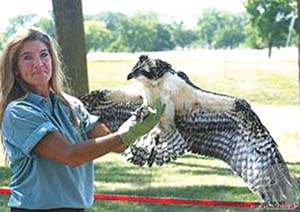 Janie Veltkamp is a raptor biologist, educator, master falconer, and federally permitted raptor rehabilitator. She founded and directs the nonprofit Birds of Prey Northwest, educating the public about raptor conservation and treating and rehabilitating wild injured birds of prey. She created and led the team that developed Beauty the bald eagle’s pioneering, 3D-printed prosthetic beak. For more information, visit birdsofpreynorthwest.org
View all posts by Janie Veltkamp →
ORDER BY MAIL