Posted on by Leon Powers

The Long Hunt to Reveal a Forgotten Biological Trek

Unhitching the two old horses from the expedition wagon, one of the men led them deeper into the gentle bend of Idaho’s Snake River. He sloshed back to the wagon, leaving the team standing to drink their fill. Two spaced cracks of a rifle dropped each horse dead into the swirling waters. The winding current tugged old Bally and Star Crust into motion and they soon were swept from view. The two men heaved against their well-worn wagon, which they had affectionately dubbed the Science Car, pushing it into deeper water until the murky current grabbed and, like the horses, it too was taken beneath the surface. It was a somber and strange disposal of their summer’s conveyance, but amid the economic freefall of 1907, no local ranchers could spare food for gimpy nags, and the expedition wagon had been remodeled beyond practical service. Here on the banks of the roiling Snake, flushing them away seemed the best answer. Slogging back to shore, the men headed toward camp, vanishing as effectively as their wagon, their horses, and even their story of Idaho’s last pioneering biological expedition.

In 1973, while working on my Ph.D. in zoology at Idaho State University, I was writing a research paper on “Early Idaho Biological Expeditions” for an Idaho history class. While thumbing through recent issues of Idaho Yesterdays, I happened onto a report that included the diary of the 1907 expedition’s leader. I was stunned. Not only had I never seen prior references to this biological expedition but, intriguingly, it had taken place near my home. This report immediately raised the question: what wildlife was collected and recorded in my heartland?

When I shared the article about the diary with my graduate advisor and mentor, Dr. Charles H. Trost, he likewise was intrigued, and contacted the biology department of the expedition’s sponsoring institution, Baker University in Kansas, asking if there were any records of the trip in their museum holdings. We heard nothing back. The following year, after I had moved on to a teaching position at Northwest Nazarene University (then College), I followed up on our inquiry. This time, I was told by the Baker biology department’s chairman, V.E. Nelson, that the museum was now demolished and few specimens remained, but he would make a search. 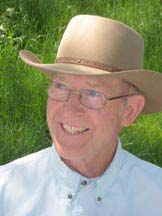 Leon Powers was born on a farm north of Shoshone and spent his boyhood roaming the foothills of Glenns Ferry, which fostered his love for the outdoors and wildlife. Retired from college teaching, he now writes non-fiction books and does “Doc Hawk” nature writing for Boys’ Life magazine (www.leonpowers.com).
View all posts by Leon Powers →