Glitter in the City

Posted on by John Shewey

Story and Photos by John Shewey

Mom might have been the first hummingbird feeder in Saint Anthony. We moved there from California in 1970, a time when providing sugar water in glass feeders for bedazzling little hummingbirds was still in its infancy nationwide. But in California’s Bay Area, my mother had discovered the joys of drawing these enigmatic little mighty mites into the yard, and she took that passion with her to eastern Idaho, hoping our new home at the foot of the Rockies was also hummingbird habitat.

She didn’t have to wait long to find out. The house we moved into that June included a flower garden wonderfully kept by the previous owners, and Mom, delighted to discover hummingbirds feeding on nectar from the colorful blooms, wasted no time in unpacking her feeders. She boiled water on the kitchen stove, stirred in a generous supply of sugar, and hung the decorative feeders in the yard, one from a tree out back, the other from the patio ceiling, dangling from a hook that Dad dutifully installed even before unpacking his boxes of fishing tackle.

Within a few days, the hummingbirds discovered this newfound windfall, no doubt attracted by the bright-red plastic flower-shaped “ports” built so the birds could insert their long, slender tongues to lap the homemade nectar. Mom was excited to learn that her first visitors were black-chinned hummingbirds, one of the four hummer species that spend summers in Idaho.

Historically, Idaho is home to dainty calliope hummingbirds, feisty rufous hummingbirds, and unassuming broad-tailed hummingbirds, alongside widespread black-chinned hummers. All four species fly to Mexico for the winter, and then undertake the long spring journey to their more-northerly breeding ranges, which include most of the Gem State. During summer, they enjoy a bounty of wildflowers, along with the human-produced boon of cultivated flowers—and hummingbird feeders, which are ubiquitous these days. Idaho’s four natives then make the return journey south to their wintering grounds, departing Idaho between July and September.

But a few years ago, a bejeweled little invader crept into Idaho. 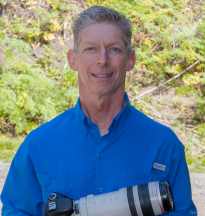 John Shewey grew up in eastern Idaho, initially in Saint Anthony and then in the hills south of Pocatello. A freelance writer and photographer, and the author of The Hummingbird Handbook and Birds of the Pacific Northwest, he now resides in Oregon.
View all posts by John Shewey →