Posted on by Lynne Larson

Life and Death in Downey

The old gentleman next to me struck up the conversation as we waited for a church meeting to begin in the large western city where I currently live. Wendall Taylor was his name. We were passing acquaintances, and he had once heard me mention the Gem State in a presentation I gave.

“I’ll bet I have,” I said with a smile, taking a chance that I knew Idaho better than Wendall Taylor thought I did.

“I’ll bet twenty dollars you don’t know Downey,” he said. “Few people do. Not in a life-and-death way. It’s just a spot in the road no one remembers.”

For a moment I didn’t answer, astonished by what I’d just heard. Wendall Taylor was from Downey?

“It’s just a little farming town off the beaten track.” He shrugged. “Not much goes on there anymore.”

“I do know Downey,” I finally told him. “Bannock County, not far from Pocatello. Yes, I know where Downey is.”

“Been through once or twice, then?” he said, about still a little doubtful about my knowledge of Idaho.

“My mother was born in Downey,” I said, “so, yes, I have been there. Not for quite a while, though. Many years, in fact.” I paused and added a bit wistfully, “It’s been too long. I need to make a visit.”

“Small world,” Wendall mused. “I guess you win the bet.”

The meeting was ready to begin and Wendall and I had no more time to compare notes or   determine if he’d actually pay the twenty dollars, but those moments of reminiscence set me to pondering what the places of our past give us, even if “not much goes on there anymore.” Suddenly, it seemed important to validate small towns and the people who had built them, towns like Downey, the spot in the road that Wendall said no one remembered. 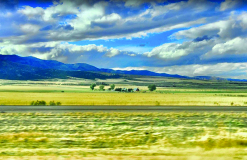 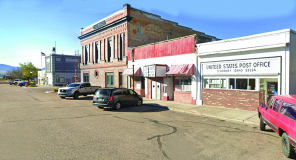 View of Downey from the highway. Sun Wuyan. 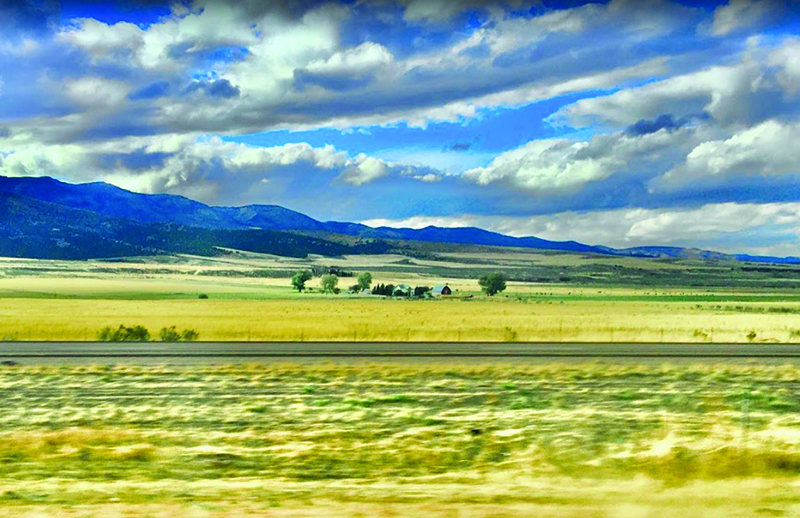 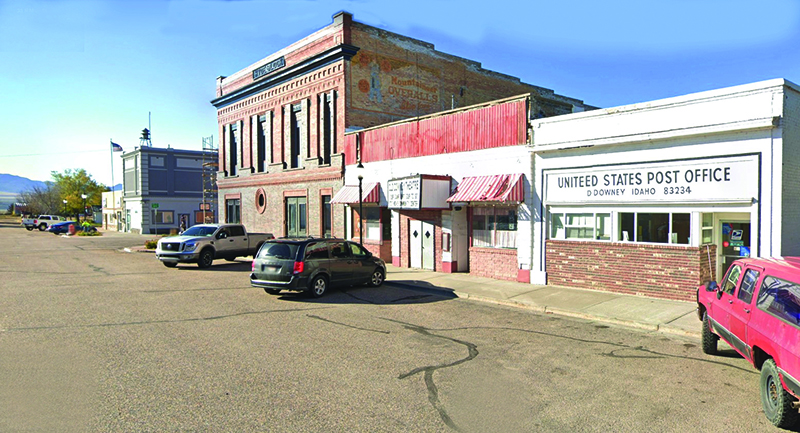 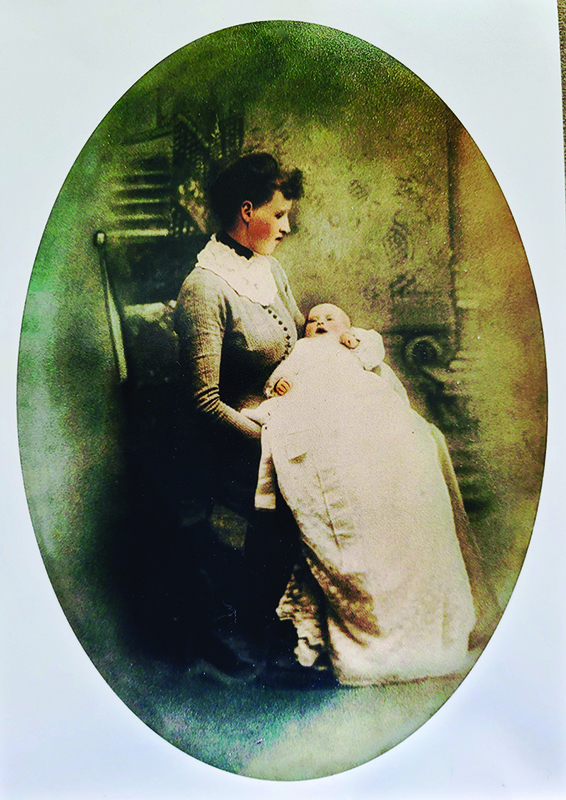 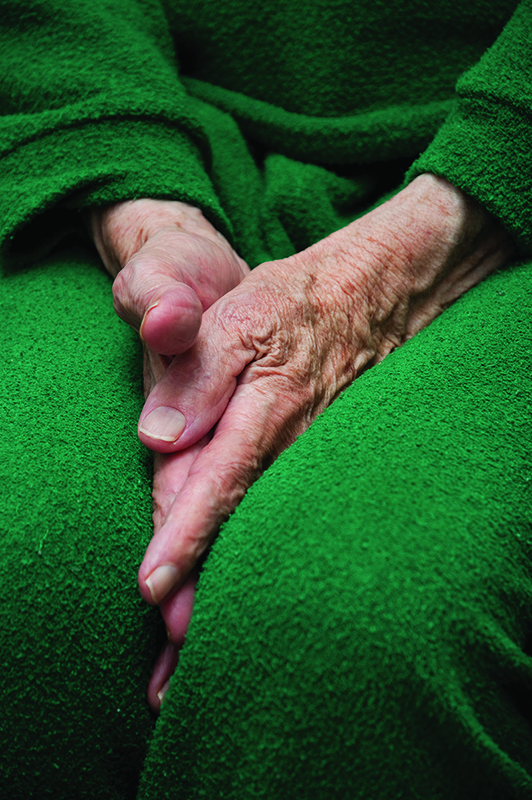 The truth was that Downey would always be a special place for me, even if I only passed by its road sign on my way to Idaho Falls or Pocatello. For one thing, I attended my first funeral in Downey many years ago, a service for my great-grandmother, Nanna Louise Nordby Anderson. She was eighty and I was five, and at the time I had no idea what people did at a funeral or a wake. I knew nothing about dying, until someone lifted me up for a look into Nanna’s casket, adorned with flowers in her home. To this day, I remember the surprise that quivered through me as I saw my Granny lying there, an ancient, white-haired woman sleeping peacefully, her body motionless, her gnarled hands folded and at rest. I had never seen a dead person, and I was as startled as any little girl would be. I wasn’t afraid of Nanna and I didn’t cry, but I remember being uncharacteristically subdued and thoughtful for the remainder of the day. Even as a child, I was aware that things had changed for me.

Had I been older, I would have realized why the townsfolk had come en masse to honor Nanna Louise that day so long ago. My great-grandmother, who had immigrated to America from Norway at sixteen with her twelve-year-old brother in tow and little else, was no ordinary woman, and by the time she died, the people of Downey knew she was remarkable. She had devoted herself to the town the last half of her life after moving there with Andrew Anderson, her second husband, and a blended family of several children who shared their mother with the community for forty years.

Nanna had been left a young widow in Utah and might have been excused from a busy life of service once she found herself in Bannock County. But a woman who had spent six weeks on a wave-pitched ocean at sixteen and several days crossing a vast and lonely continent by rail possessed too much grit to be idle very long. Nanna became Downey’s resident guardian angel and practitioner. She worked diligently with the Red Cross during both World Wars, caring for veterans and their families, and she nursed the sick and dying during the flu epidemic of 1918, “laboring day and night,” her eulogist said, without ever getting the disease herself. She helped guide her church’s Relief Society, visiting and teaching in different area wards, and she fostered reading and education as a founding member (with her daughter Lottie Almond) of the Downey Study Club. Impressively, this girl who knew no English when she got off the boat from Norway would one day promote classic literature in rural Idaho.

Above all, Nanna had aided the town in a very personal way, turning her house into a maternity home where women could come for care preceding and during childbirth. Of all her contributions, this one had the greatest impact and placed Nanna among an unsung multitude of rural women who not only inspired the next generation but helped it take its first tenuous breaths in a country where hospitals were scarce and modern neonatal intensive care units had yet to be invented. Yes, Nanna Louise was most of all a midwife, and for thirty years, she helped bring Downey’s children into the world. An estimated three hundred and sixty babies were born with her assistance. Three hundred and sixty babies on that lonely Idaho plain, and according to the records, she never lost a mother in the process. Working with six or seven doctors during her career, Nanna was so skilled that her own daughters usually returned to Downey when their children were due—which is why my mother was born there in 1917 under Nanna’s watchful eye, although Mom’s immediate family lived in Shelley, eighty miles to the north, where doctors and midwives were in adequate supply.

Nearly every home within a ten-mile radius of Downey welcomed Nanna at one time or another. Sometimes she traveled by buggy or wagon to weary mothers who couldn’t come to her, and many mourners at her funeral knew they owed their first breath to the woman on the bier.

An old formal photograph of Nanna Louise shows her wearing a fancy dress with a large white collar. She is seated, holding a child in her lap, and looking affectionately into its eyes. The baby is swathed in a long blessing gown trimmed in lace which reaches to the floor. This baby was Nanna Louise’s own first-born, a boy who lived eight months before he died in 1891. Little Shirley Martin Nordby was the first of nine children Nanna herself would bear.

Perhaps the grief of losing that first child pointed Nanna to her life’s work and helped her become the sensitive and skillful caregiver she was. It’s been said that our trials bring us strength. Maybe that’s why the photograph is more to me than a portrait of Nanna and her son. In it, I see each one of those three hundred and sixty children she helped bring into the world for thirty years in Downey, when life was hard and unpredictable, southern Idaho was just a prairie, and my great-grandmother worked so tirelessly for the things that mattered most.

As Wendall Taylor and I left our big-city church when our meeting ended, I was still
thinking about Nanna Louise and her generation. The messages we’d heard over the pulpit had focused on the brevity of mortality and the importance of inspiring others and being good examples for our children and their children yet to come while we had the chance. With those ideas in mind, I made another comment to Wendall about Downey as we headed to the parking lot together.

“I learned those same lessons years ago in your hometown,” I said.

We paused, and I took a minute to tell him about looking into Nanna’s casket and being
startled by seeing death for the first time when I was only five. Wendall was interested. “Yeah, that would be tough on a youngster,” he agreed. “Still, it was a teaching moment. Time is short. No one lasts forever.”

“But something happened later that’s important, too,” I said.

Wendall winked. “I think you really want that twenty bucks,” he laughed, “but go ahead. I can’t wait to hear.”

“Well, a couple of hours after I saw Granny,” I began, “we all got into cars and followed the hearse to the church for the services. I remember standing by my mother in the front passenger seat, looking over her shoulder into the back of the car where three adult relatives were tightly squeezed together. We hadn’t gone too far when Nanna’s youngest daughter, who was holding a baby, unbuttoned her blouse and exposed her breast, lifting the baby up to suck from under its blanket. No one paid any attention to what the woman was doing except me. As I watched, my five-year-old eyes widened, and I felt the same shudder that had jolted me earlier at the casket. It was the first time I’d ever seen a mother breast-feed a baby, and I was amazed.” I looked back at Wendall as I finished. “True story,” I told him.  “Two lessons about life in just a couple of hours. When I think about it now, it was kind of weird . . . and wonderful.”

“That was a lot to take in, in one day,” Wendall nodded, “especially for a little girl.”

“Life and death in Downey,” I shrugged, smiling.

Wendall was quiet for a moment. His expression had turned gentle. Perhaps he was remembering his own words from earlier when he’d spoken of my really knowing his hometown.“I think I might send that twenty to the Bannock County Historical Society,” he said, “that is, if you don’t mind.”

I didn’t mind. I’d long forgotten about the twenty, and Wendall knew it. I was far away, thinking of Nanna’s daughter nurturing her own child, and of my great-grandmother’s gnarled hands, finally at rest.

Lynne Larson now writes novels, short stories, essays, and articles about the West and its people after twenty-eight years as an award-winning educator in Cassia County. She is particularly proud of her Idaho heritage. Lynne is a graduate of BYU and holds an advanced degree from Idaho State University.
View all posts by Lynne Larson →
ORDER BY MAIL