A Town That Wouldn’t Die

When I first moved to Heyburn in 1985, I was twenty-five, about to deliver my second child, and the mother of a spirited eight-year-old boy. We were excited to move into our home on Doggett Drive in a fairly new neighborhood. I had met my future husband Shane at a Burley car dealership. He was a parts man and I was delivering parts from a Twin Falls company. He was shy at first, and I thought he was so cute. We eventually started dating, and within a couple of years, we were married. The house on Doggett Drive was the first one we bought together.

In Heyburn, we soon found ourselves planting trees, moving rocks, and settling into everyday life. Doggett Drive was, and still is, a quaint neighborhood with lots of trees. All the houses, or at least most of them, were well-kept, and beautiful flowers and plants came to life each spring. When we first moved in, our neighbors across the street, the Overlands, were a small family, like ours. Their kids and ours played for hours, riding bikes, building forts in the vacant lot next door, and becoming lifelong friends. Shane and I also quickly made friends with the adult Overlands, and many evenings we shared dinner and enjoyed other activities together. When they left the neighborhood, the Perkins moved in with their sons. Our son Darren and their son Jason became great friends, and our life on Doggett Drive continued placidly.

Darren entered first grade at Heyburn Elementary in 1985, the year our daughter Heidi was born. Heyburn is a small community, and the students all knew, or at least knew of, one another. Darren grew to love his teachers and his coaches. He started playing Little League baseball in third grade, and a park across the highway adjacent to the Heyburn city offices gave the kids the opportunity to play ball near to home. I’ll never forget when his team took first place, how full of excitement those little boys were. Once again, the teammates made friends that have lasted through the decades. 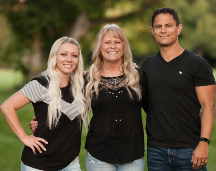 Janelle Dallolio is shown here with her daughter Heidi and son Darren. Born in Twin Falls in 1956, she moved with her family to Rupert in 1965. She attended Minidoka County schools, then earned a bachelor’s degree from Idaho State University and a Master’s in educational administration from the University of Idaho. Janelle has worked in the Minidoka County School District since 1995, and is an adjunct English teacher at the College of Southern Idaho.

View all posts by Janelle Dallolio →