Story and Photos by Ken Neely

“This is gonna take a while,” I mused after several minutes of scraping and chipping. I was working on a nasty buildup of carbonized food residue on a cast-iron muffin pan we bought at a Boise estate sale. The rarity of such a pan, paired with the price of only a couple dollars, was too good to pass up. But it came needing a lot of elbow grease to get it looking good again.

The pan had eleven shallow baking cells arranged in three rows with four cells on the outer rows and three cells in the middle row. It also had ten small triangular openings along the edges of the baking cells. Two larger openings on each end of the pan, along with a piece of metal connecting the outer baking cells, served as handles. All fourteen of these openings were crusted with the hard gunk, some of them almost entirely blocked by years of accumulations.

Back to chipping and scraping I went, removing the black deposits with an old screwdriver. After a while, I hit pay dirt when silvery metallic streaks left by the screwdriver revealed that I had reached the cast iron. More chipping and scraping, followed by wire brushing and the use of a wire wheel attached to an electric power drill, finally resulted in a clean muffin pan. I then seasoned it with a coating of cooking oil and baked it in our oven. This was our biggest restoration project for a large piece of cast iron cookware up to that time. The muffin pan has been a favorite of ours over the years, producing delicious and evenly-cooked cornbread, brownies, and banana bread topped with strawberries, almonds, chocolate chips, and coconut. 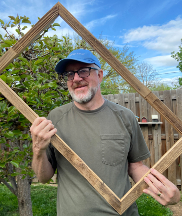 Ken Neely is a hydrogeologist who retired from the State of Idaho in 2019 after twenty-eight years and is now a part-time tech writer for hydrologic consulting companies. He has geoscience degrees from West Virginia University and the University of Idaho. Ken says, “After years of writing scientific water reports, I'm trying my hand at creative writing projects.” He and wife Nancy are Boise residents.
View all posts by Ken Neely →
ORDER BY MAIL