Posted on by Chuck Trunks

The Worst and the Best

From the middle of an oversized fabric couch in his dimly lit living room in Boise, with each sneaker firmly wedged on the side of a heavy coffee table, Keith prattled on and on about the numerous illustrators and editors who were messing with him at a New York publishing company. I tuned out his words as I attempted to decide who this guy looked like. Suddenly, I realized it wasn’t someone else he resembled. His face was surprisingly similar to a crumpled pillow I once had pulled from between my sofa’s cushions after I had stopped searching for it months earlier.

The mystery solved, I felt like I should tune in again. After all, this was an interview of sorts, whose outcome would decide whether I’d provide cover art for his soon-to-be-published novel, One White Whisker. As he angrily recounted the firings of a string of illustrators before me, it got interesting. I marveled at my ability to find the worst people to accept art commissions from. Yet something about Keith made me welcome his ridiculously low offer of payment, which was guaranteed to come with headaches and resentment. As I stood and shook hands with this diminutive, feisty old man, I felt like we weren’t agreeing on the same thing. He was securing the services of a freelance illustrator at a discount, while I was making an absurd promise to myself to be the one who actually satisfied him. Little did I know that the paltry fee I earned over three excruciating months would end up being the best commission I ever received.

When he opened the door a few days later, Keith wore the same jeans and sneakers but with a different T-shirt. His expression was unchanged, a kind of crumpled resignation that could come only from a mixture of self-righteousness and perpetual indigestion. He decided I needed to be given a complete tour of the place, which ignited a fuse of worry, since I had a tennis match scheduled for that afternoon. Keith had the sequence of storytelling DNA that seems to activate in people once they’re eligible for Medicare. By the end of the house tour, I had listened to a handful of tales concerning events I hadn’t inquired about, and knew way too much about his every physical ailment. To this day, the word “ablation” transports me to Keith delivering one of several dozen soliloquies on incompetent doctors. 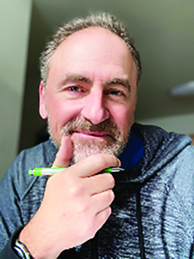 Chuck Trunks became a proud Idahoan when he moved to the Gem State in 2015. A lifelong artist and writer, his Boise-themed greeting cards are sold throughout the city and at the State Capitol gift shop. His book, Must Love Dogs: A Tragedy of Sorts, was published in the summer of 2022. See his work at www.trunksart.com.
View all posts by Chuck Trunks →
ORDER BY MAIL