Posted on by Susan Miller

The first few years of my life were spent in the Pahsimeroi Valley while my father worked at the Ima Mine, where tungsten, silver, and zinc were extracted from the Lemhi Range, which borders the valley’s eastern side. After the mine closed we moved west, over the Lost River Range into the Little Lost River Valley. Of course, we visited the neighboring Pahsimeroi Valley many times while I was growing up, to hunt, tour, and visit good friends. I moved back to the valley eighteen years ago and am married to a childhood friend.

We raise cattle and hay at our ranch, which is a mile south of Patterson and about seventeen miles from May, where my husband’s family has been for four generations. Over the years, the valley has undergone many changes, including the transition from flood irrigation to now mostly the use of pivots. In the past, we put up hay with the help of horses and the device made of poles and planks called a beaverslide, but now modern equipment does the work. One thing that hasn’t changed about the valley is dominance over the landscape to the south of Leatherman Peak and Borah Peak, the latter the tallest mountain in Idaho.

The Pahsimeroi River begins in the Lost River Range near Borah Peak. It forks at the head of the valley, runs underground in several places, and travels northwest along the length of the valley’s approximately sixty miles before it drops into the Salmon River near the town of Ellis. If you look at a map, the Pahsimeroi Valley is roughly the northern half of the entire open space that runs between the two mountain ranges down to Howe. The bottom half is called the Little Lost River Valley.

The meaning of “Pahsimeroi” is in question, but I’ve found that it most likely is derived from a language of the Bannock, Shoshone, or Lemhi Tribes who first occupied the place, and it may mean “grove of trees by a stream.” Many of the first white settlers described the valley’s tall prairie grass and large herds of buffalo, and another name of the tribes for this valley was, “Land of the Buffalo.” 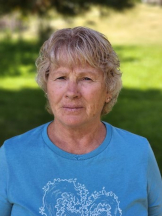 Susan Miller spent her first years in the Pahsimeroi Valley and has now lived there for the past eighteen years. She says it always has been a special place to her and is even more so now. While working on the family ranch, Susan has learned a lot of history about the valley. Much of her time is taken up by the ranch but she also enjoys hiking and four-wheeling.
View all posts by Susan Miller →