Posted on by Lance Pounds

Challenged Athletes in the Wild

After I moved back to Idaho from Portland to start my own solo legal practice in 2018, I played tour guide for my good friend Josiah and suggested we take a jaunt to Goose Creek Falls while we vacationed in McCall. A tour guide is not supposed to feel much trepidation, yet I did. I had not been there in several years and didn’t know if I would be physically able to get to the falls, let alone make it back.

I have cerebral palsy. The line connecting my body and my mind is conjoined in a perilous link that sometimes seems to not exist. This condition makes speech laborious and slow. It unbalances walking and causes uncontrollable movement. I move back and forth, have no way to stop it, and trip when I intend to walk. When I eat, my flailing arms produce jerky movements that seem as if an invisible foe is attacking me, which, if I’m honest, might be the only reason I’m so skinny. If only everyone had an invisible hand slapping their real hand as it scooped ice cream into their mouth.

I didn’t actually discover Goose Creek Falls until my college days, but it quickly became a pilgrimage every time I visited McCall, which is a place deeply and intrinsically woven throughout my memories. My family built a cabin on Warren Wagon Road, where you could pet a bobcat down the street. My earliest memories there are of snowmobiling with family and of my father hugging me as we whisked up to No Business Lookout. Over and over, I crashed into McCall’s ditches and streams, leaving my brothers to pull out my snowmobile along with me. After I completed the bar exam to become a lawyer, I spent months alone in that cabin surrounded by white pine—an aroma that became therapeutic to clear my mind. But a clear mind is only good as the connection between it and the body it is supposed to command. 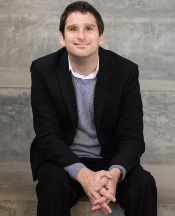 Lance Pounds was raised on a small farm outside Ontario, Oregon. Despite his physical limitation, he drove a tractor, rolled hay bales, fed and watered cows. He says he was well-known in his youth for his tap dancing—but not so much anymore. He is an associate attorney at C.K. Quade Law in Boise, where he practices elder and disability law, ckquadelaw.com.
View all posts by Lance Pounds →
ORDER BY MAIL