IDAHO magazine recently received the following story from Judy B. Frederick of Boise. In an email, Judy told us the story’s author “was my birth father whom I never met.” She added, “I have recently been welcomed into the Brown family and have been impressed by the writings and history given to me by family members.” Lewis Orson Brown was the youngest of eleven children in a family who lived in the Salmon area. His Uncle Shane was a prolific writer of stories and poetry, and Lewis was well-known as a storyteller. Judy’s cousin, Gayla Kaiser of Salmon, sent her this story, which Lewis wrote in 2009.

Times were tough in the 1920s and 1930s with the crash in 1929 that started the Great Depression. People had to adapt overnight
or disappear, just as their savings had done.

As banks failed, people’s way of life came under threat, going right down to their very survival. At the age of twenty-two, my uncle Shane Brown was in the process of buying a fine ranch on the Lemhi River. His hopes were high until the place suddenly was bought out from under him by a colorful ex-sheriff from Alaska named John Snook, who was also warden of the state prison in Boise. With ready cash, John offered the seller a deal he couldn’t refuse.

Frustrated and angry, Shane intended to shoot his rival on sight at the first opportunity. John knew Shane to be a serious threat, so he took the proper precaution to turn to the law, and he managed to stay alive until Shane’s anger had cooled. By then, Shane had made more stable plans to resolve this crisis in his life. He had married, and the couple had a baby on the way.

He located a fertile forty-acre parcel of undeveloped land across the Salmon River from Kriley Gulch [between contemporary North Fork and Carmen], formerly the old Thurman place. If he could manage to put in a working irrigation system, he could maybe support six head of milk cows, forty sheep, and a team of horses broke to ride.

One drawback was that the land was located on the far side of the great Salmon River, and there was no bridge. But with his horses, he easily solved that problem. A ten-foot wooden boat served as a ferry to cross the river. The boat was pulled by one of the combination work-and-riding horses, by means of a rope tied from the saddle horn to the boat. 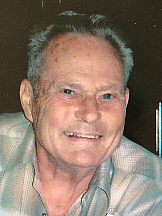 Lewis Orson Brown (1924-2010), was born, raised, and died in Salmon, and was proud to have lived outside of Lemhi County no more than fifteen years throughout his life. He served in the U.S. Navy, owned a body and fender repair shop, and worked for the Idaho Department of Highways before retiring in 2000. In 2003, he was named Honorary Old Timer at the annual Gibbonsville Old Timers’ Dinner.
View all posts by Lewis Orson Brown →
ORDER BY MAIL