The Battle of Britain is going on outside my dining room window. The hummingbirds are at it again.

It happens at intervals all day long, every day. Every time too many colorful little P-38s hover around the red feeder that hangs from the eaves of my Priest River place, the aerial sorties begin. The combatants never hurt each other, though. Their battles are bloodless as they chase away their own kind, tiny little wings humming like electric fans. There seems to be always one who guards the feeder most religiously.

Assuming he’s a male, is he a particularly anti-social little fellow? Is that miniature bundle of aggression just selfish, one who doesn’t like to share? Or has it been too long since his last meal, and he fears missing out on dinner?

Who knows? Hummingbirds seem to be particularly antagonistic little creatures with their own kind. They are so tiny, so cute—utterly adorable, really. Perhaps their size makes them feel they have to be belligerent to survive. 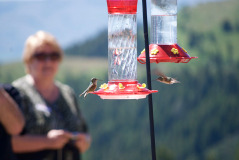 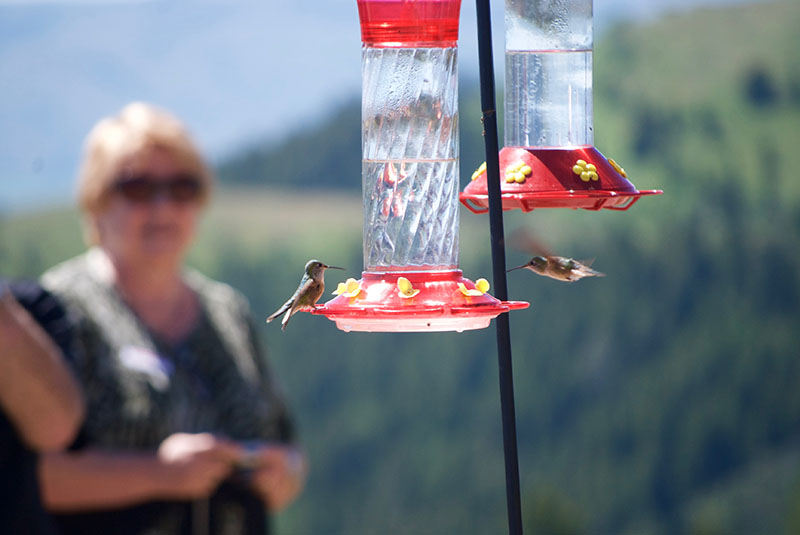 Ever since I moved into this house on the hill in 1973, I’ve been entranced by hummers, but my acquaintance with them began earlier, when the family resided in an old house of 1910 vintage in the hollow below the hill. There never seemed to be many hummingbirds around it but once, when my youngest son was four or five years old and we were all outside, one flew into his hand.  My quick-with-the-reflexes little boy wrapped his hand around the bird, which was perhaps a young one just learning to fly who hadn’t yet grown into his aggression. He huddled meekly in Timmy’s hand, waiting for whatever fate would befall him. As soon as the hand released him, though, the tiny bird shot away like a bullet fired from a gun.

Hummers do seem to love this hilltop. Perhaps it’s the sugar water that tempts them. Insects are part of their diet, providing protein, but their main food source from Nature is the nectar that comes from flowers. To make a substitute,
I combine one cup of sugar with four cups of water and bring it to a boil on the stove just long enough—maybe a minute—to make a very thin syrup. I pour it into a feeder made just for hummers, hang it up, and wait for them to show. Then I’m everlastingly entertained.

Hummingbirds can fly twenty-five to thirty miles an hour, flapping their wings an estimated seventy times per second. They are the only birds that can fly backwards, and can appear to sit in mid-air by floating. They have the fastest metabolism on earth, and their brilliant colors come from the iridescence in the arrangement of their feathers, not from color pigment.

They love water. On hot summer days, they spend a lot of time bathing and playing in the spray from my soaker hoses. And when they fight, nobody gets hurt.

Marylyn Cork has lived in Priest River more than fifty years and in Bonner County more than sixty years. Writing since she was nine years old, she retired as editor of the Priest River Times in 2001. She enjoys reading, gardening, hiking, camping, and traveling.
View all posts by Marylyn Cork →
ORDER BY MAIL