Posted on by Aaron Theisen

Story and Photos by Aaron Theisen

A dirty secret about us outdoors writers, especially in the spread-out West, is we spend a lot of time staring out the window. I drive some twenty thousand miles a year. I sometimes feel like I’m behind the wheel more than I’m on the trail. While some folks enjoy driving, I view it as a chore, to be accomplished as expediently as possible so I can get to the good stuff. With adventure cycling, however, the pavement becomes the payoff. It stops being about counting down the miles and starts being about adding them up.

Some forty thousand miles of gravel and two-track roads trace Idaho—per capita, it has three times the road-lane miles of Texas. As such, it’s a state well-suited to adventure cycling. The community of Cascade, long a recreation destination because of the rivers that flow through and near it, has embraced its share of those roads, with a newly developed set of adventure-cycling routes developed by the West Central Mountains Economic Development Council (wcmedc).

Several years ago, that organization’s executive director, Andrew Mentzer, joined a city group called the Cascade Mobility Team, which works on mobility issues ranging from transportation to recreation. Team members John Cooley and Dave Beck stumped for the gravel-riding opportunities on the myriad two-track and Forest Service roads radiating out from Cascade. Under the guidance of Beck, a seasoned adventure cyclist, the trio began working up a handful of routes and researching the logistics of cyclist safety and amenities on each track—in other words, could the community safely and credibly send a rider out on the route?

The WCMEDC then reached out to Idaho-based professional adventure cyclist Jay Petervary, whose bike sponsor has been at the forefront of the industry. Intrigued by the work taking place on the Payette, Jay volunteered his expertise as a gravel ambassador. 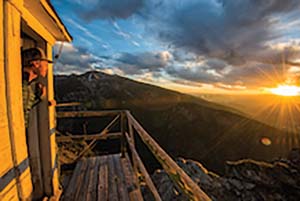 Aaron Theisen is an outdoors writer and photographer based in Spokane. He is the author of Day Hiking Glacier National Park and Western Montana (Mountaineers Books).
View all posts by Aaron Theisen →
ORDER BY MAIL