Tales from the Open Pit

Posted on by Russell Steele

A Summer at the Blackbird Mine

In the rear view mirror I could see my new hard hat, just a shiny reflection in the damp dust on the narrow haul road. It was the first day for the hat, which had replaced a beat-up pressed-fiber one my dad loaned me when I first got a job driving a water truck to wet the dusty roads at the open-pit Blackbird Mine. More concerning was the black diesel smoke shooting into the sky as the Euclid #1268 dump truck struggled up the hill with a load of overburden for the dump. On the narrow road, I knew my new hat could soon be a flat aluminum saucer if I did not recover it before old #1268 topped the hill and rolled down onto the spoils dump.

I cranked the steering wheel of the surplus Army 4WD hard to the left, shifted to third gear, and stomped on the accelerator. The four-banger under the hood screamed in protest as I circled back to pick up the hard hat. Suddenly, my world started to tilt. Glancing out the passenger side window, I saw the tree-covered horizon slowly disappear, replaced by rocks and dirt. I gripped the wheel hard and slammed my feet to the floor, bracing for the impact. Dust and loose stuff filled the cab as the water truck rolled over and then skidded to a stop on its side.  Water rushed from the tank, creating a small river in the dust. Fuel fumes filled the cab as I groped for the ignition switch and killed the engine.

My immediate thought was, “You’re fired!” It was my second week on the job at the Blackbird’s open pit after graduating from Salmon High School in 1957. During our first morning on the job, the shift foreman, Don McGowan, had explained the safety rules and made it clear that damaging the equipment was a firing event. “Respect your tools,” he warned.

Since the late 1800s, miners had been extracting copper and cobalt, with a little gold and silver on the side, through a complex of tunnels at the mountain, but the engineers had determined the ore body came all the way to the roots of the lodgepole pines that covered the upper end of the deposit. The mine owner, a now-defunct company called Noranda, hired a construction group out of Reno to access the copper and cobalt ore deposits.

The Blackbird open pit project was just getting started the year I graduated. My dad Bert and mother Margaret were managing the Cobalt Recreation Hall, my younger brothers Bob and Ron were working at the IGA Market, and I went looking for a job at the mine. 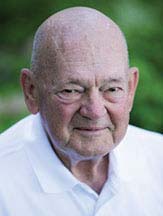 Russell Steele lived in Cobalt from 1949-1952 and 1956-1957 with his father Burt, mother Margaret, and brothers Bob and Ron. He wrote a book about his life, Cobalt: Legacy of the Blackbird Mine. Russell is a broadband consultant, freelance writer, and blogger.
View all posts by Russell Steele →