This story is offered free in its entirety for the first part of July.

Camas County has a problem with dying. You see, even though the county is as large as Rhode Island, and even though our thousand residents live in a high altitude valley just below the Sawtooth Mountains, with miles and miles of unoccupied space, unfortunately, there is no space for the dead. Our cemetery is full.

Rural cemeteries like ours don’t resemble those in metropolitan areas. There is no cultivated grass or a regular groundskeeper. It’s as rustic today as it was when created early in the twentieth century. The area is fenced to keep cattle out, and the only nod to modernity is that the wild grass and weeds are kept cut as well as they can be. People in rural areas of the county have a choice: be buried in the established town cemetery at Gooding, thirty-five miles away from Camas County’s only town of Fairfield, or in the one close to home that is not maintained. It has been said that Fairfield people considering their final resting place can choose either to have lawnmowers or squirrels running over their graves.

Back in the late-1800s, the creation of counties themselves was predicated on a person being able to travel from the far corners to the county seat in one day by horseback. Travel of any distance was a challenge, and dead people certainly couldn’t be transported long distances. Thus, each small settlement created its own cemetery. In frontier days, graves were apt to  be dug almost anywhere when necessary, but our Judeo-Christian background, which is the basis for burial of the body, dictates that it should be done in a special place. In our county today, elaborate mausoleums are occasionally built for the wealthy, and cremations are sometimes performed, but burial remains the most common practice. Each one of us must be taken care of at death, and our strong traditions pretty much insist that we be buried. I think contemporary America has few traditions that apply to the dead, but one cultural requirement seems to be interment in an established cemetery. 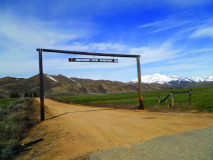 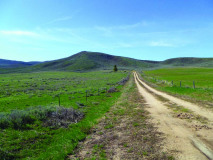 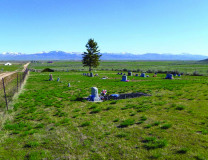 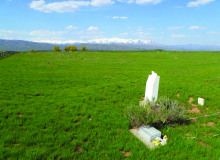 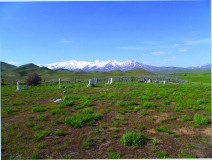 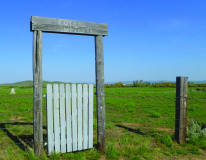 Mountain View Cemetery is about five miles north of Fairfield. 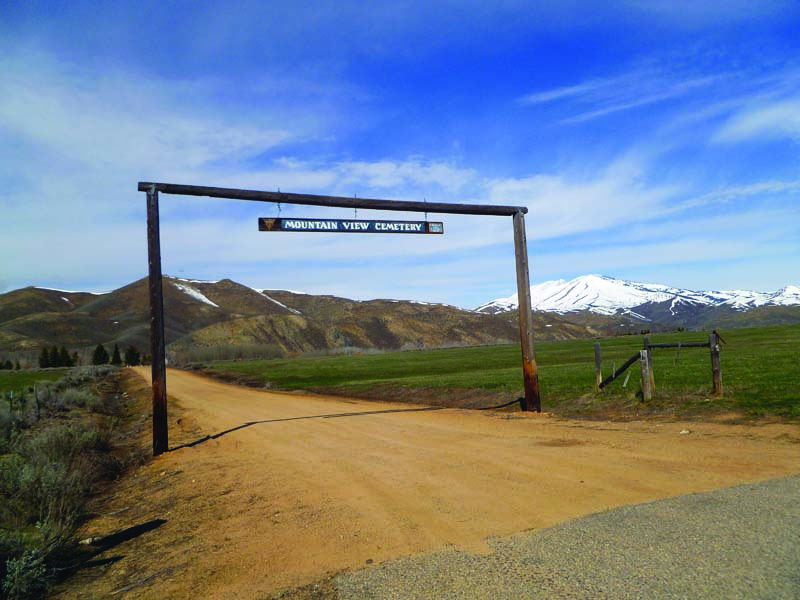 This small track off the main county road leads to Manard Cemetery near the South Hills. 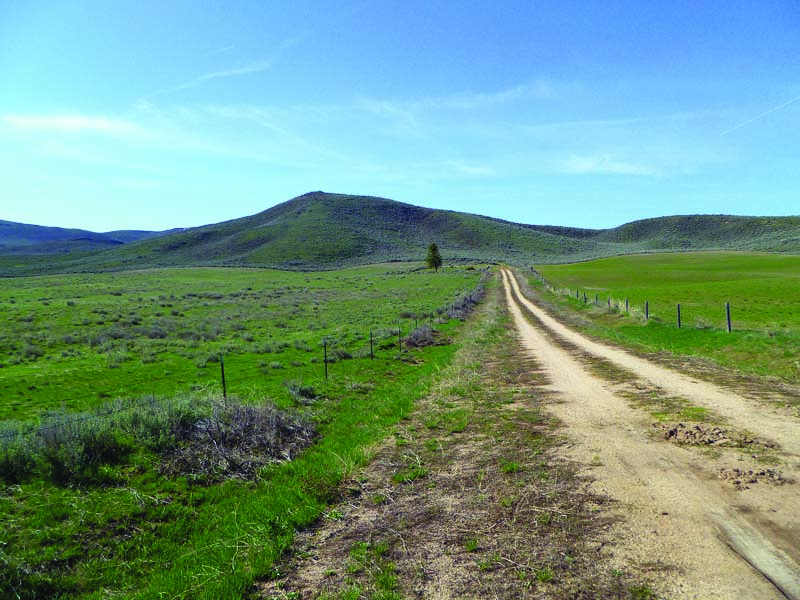 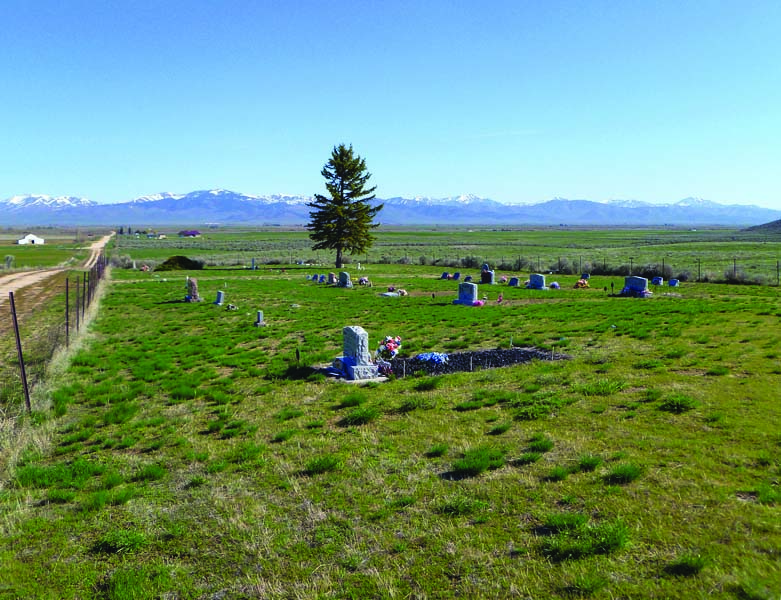 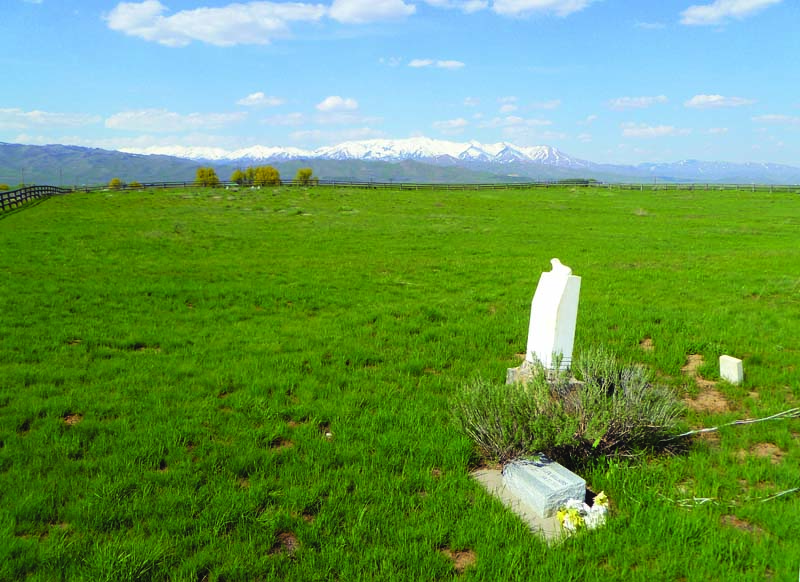 Corral Cemetery, with Soldier Mountain in the background. 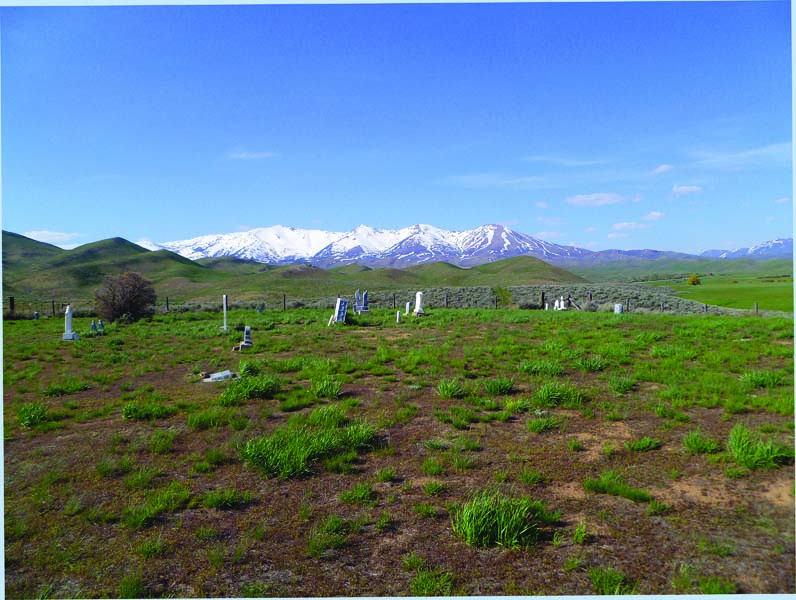 All the Camas County cemeteries have both a walk-in gate and a wider drive-in gate for hearses. 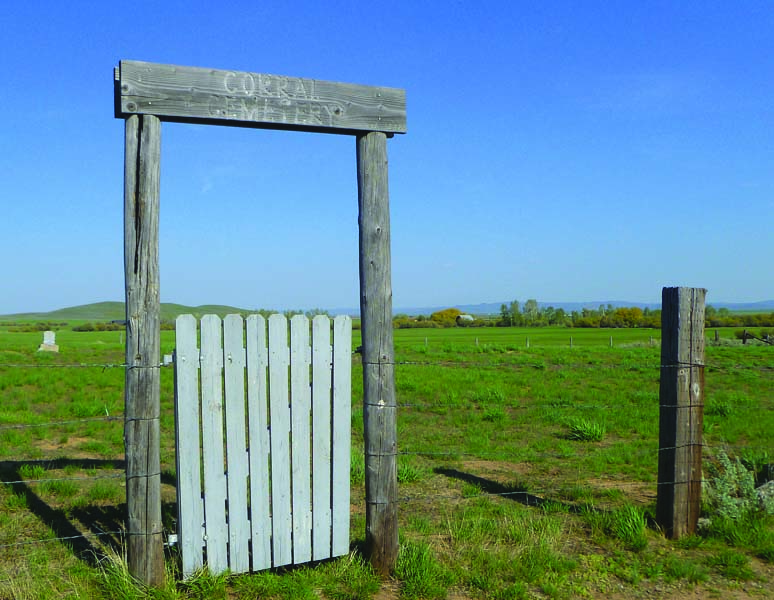 Four pioneer cemeteries were created in Camas County and three of those, at the extreme limits of the prairie, still exist, but are rarely utilized. Most local people don’t even know where they are, because the settlements disappeared long ago.

The Manard Cemetery is located near the South Hills that surround our valley. After leaving the main county road, a small track takes you there. It’s the largest outlying cemetery in the county, with about forty-five graves. The earliest one I found was 1911 and the most recent was from 2004.

The Hill City Cemetery is on flat land at the extreme western boundary of the county. It holds about thirty-five graves, three of which were added in the 21st Century. Hill City was once one of the largest towns in the county and most of its cemetery’s earlier graves were in the  south end close to the town. There is a large unused space, with most late 20th Century and early 21st Century graves far to the north.

The Corral Cemetery  is in the middle of the county, perched on a ridge of a foothill of Soldier Mountain, which towers over our valley.  Much more difficult to visit, you have to go through a farm lot and climb the hill to reach it. The markers of the roughly twenty graves here have been exposed to harsh weather and, as such, many of them are difficult to read. Most interesting among them is that of an individual born in 1834, who served in the Connecticut Rifles in the Civil War.  I found no graves added since the late-1940s.

These three cemeteries are all cared for (in the sense that weeds are kept mowed down) by the county cemetery district, and they’re fenced to keep cattle out. But taken together, they hold only about a hundred graves, with just one new grave added in the last decade.

For all practical purposes, the fourth graveyard—the Mountain View Cemetery just north of Fairfield—is the Camas County Cemetery. And that’s where the problem lies, because it no longer has any room. Actually, there’s much unused space, but all the grave plots have been sold, and no more space is available for new ones. Until major construction efforts are made to enlarge the cemetery on adjoining land that has been donated, all local burials that don’t have lots already purchased are on hold.

My wife and I, both of us lifelong residents of Camas County, would like to purchase a place to be buried in the cemetery, but we can’t do it. When I inquired what would happen if we died right away, the official answer I got was, “Guess they’ll have to put you into cold storage until the improvements are complete.”

That would be funny if it weren’t so serious. The point of a cemetery is not just to provide an official place to bury the dead. The impact on families of having a place indicated by tombstones (now more politely called grave markers), where they can visit to remember and honor their loved ones, is long-term and significant. I spent four years in the Old South, where a visit to a cemetery was like going back a hundred years to Civil War times. Maybe more than anything else, a cemetery is the permanent example of a town’s history.

The current problem with our Mountain View Cemetery is supposed to be corrected this summer. I guess at least until then, we’ll just have to wait to die.

Clell G. Ballard has lived his whole life in Camas County. He earned a Master’s degree in diplomatic history and for thirty-five years, he taught high school students in Fairfield. In the summers, he dry-land farmed with his uncle. Since 1980, Clell has had more than two hundred articles published. He has written regularly for Skinned Knuckles and Farm Collector magazines. He and his wife Marilyn, the district librarian, have five grown children.
View all posts by Clell G. Ballard →
ORDER BY MAIL