Billy Jim Wilson was born in Oregon in 1936, and moved with his family to Riggins in 1939. He went to high school in Riggins, attended the University of Idaho, and graduated from Idaho State University in 1969. He earned a Master of Library Science degree in 1970, and was director of the Coeur d’Alene Public Library from 1970 through 1978. He then worked at Boise Public Library as a reference librarian until retiring in 1998. His wife of more than a half-century is Mary Alice Wilson.

You Fix It, You Drive It

Better Learn to Drive, Though By Billy Jim Wilson Early in life I began to show an aptitude for mechanics, obviously inherited from my father, who was very talented with mechanical things. My mother liked to tell the story about … Continue reading →

This content is available for purchase. Please select from available options.
Register & Purchase  Purchase Only
Posted on October 1, 2019 by Billy Jim Wilson / Leave a comment

Early Cattle Drives through Idaho By Billy Jim Wilson In 1879, the year after the Bannock War that pitted U.S. troops against Bannock warriors of southern Idaho and Paiutes of northern Nevada, cattlemen in eastern Oregon began to see the … Continue reading →

This content is available for purchase. Please select from available options.
Register & Purchase  Purchase Only
Posted on September 1, 2019 by Billy Jim Wilson / Leave a comment

For years, the Riggins airport east of town, across the main Salmon River, was accessed by a swinging bridge at the end of a short street in the middle of town that went about halfway down the riverbank. Continue reading →

This content is available for purchase. Please select from available options.
Register & Purchase  Purchase Only
Posted on May 1, 2016 by Billy Jim Wilson / Leave a comment

Not long after lunch, the principal of Riggins High School, Jack Wing, came to our classroom and told me a house was afire up Shingle Creek at the Deveny Ranch, and we needed to take the fire engine up there.

This was in the late spring of 1953, my junior year in high school. I grabbed my assistant fire chief, Daryl Dubbs, from his class and we drove to where the fire engine was garaged. Four other high school boys followed us in another car. At the garage, one of them climbed into the fire engine between Daryl and me in the two front seats. The other three boys followed us as we went south out of Riggins, the siren and lights going. It was about five miles to Rapid River, a couple of miles on the gravel road upriver to the mouth of Shingle Creek, and then about two miles up Shingle Creek to the Deveny Ranch. We stopped at the mouth of Shingle Creek, and the three boys behind us parked and jumped onto the rear bumper rider of the fire engine. We hurried on up to the fire.

By the time we arrived, the house had burned to the ground, and a few ranchers were trying to prevent the house fire from becoming a range fire. A Forest Service Jeep pickup soon arrived, carrying a hundred-gallon tank of water and a pump. Daryl and I drove our fire engine down through the rocks to the creek, put our suction hose into a pond and got it ready to pump, while the other boys ran out the hose and prepared to wet down the hot ashes. Right after we got the pump going, a Forest Service worker came over and decided our suction hose ought to be in a deeper hole of the creek. He picked up the hose and flopped it over into the other hole, causing our pump to lose its prime. I tried everything I could think of to re-prime it, but failed. Continue reading →

This content is available for purchase. Please select from available options.
Register & Purchase  Purchase Only
Posted on January 1, 2015 by Billy Jim Wilson / Leave a comment

It was dusk, and we could smell whiffs of smoke from the forest fire we had been sent to extinguish, but we couldn’t spot it.

The timber was heavy as we rounded a ridge on the trail, heading northwest from Baldy Lake in the Seven Devils Mountains. Not knowing the exact location of the fire or its size and condition gave me visions of it suddenly taking off, and gobbling us up.

We were here because early that morning the lookout at Hat Point, across Hells Canyon from the Seven Devils, had spotted intermittent smoke from a lightning storm of the previous day. Jack Alley, the Riggins District Ranger, had sent me to hike in with an older fellow, who I seem to remember was a college student from Arizona. We went by truck to Windy Saddle, at the end of the road from Riggins, and then began walking. It was 1954, my second summer of working for the U.S. Forest Service. I was only eighteen, a year or two younger than the other summer employees, but I was nominally in charge, because I knew the country from having visited my Uncle Allen Wilson’s cow camp a couple years earlier.

We had begun our hike at about 1 p.m. on a Thursday. The trail led westerly across both forks of upper Sheep Creek, onto Dry Diggins Ridge, and then southerly to the upper reaches of Little Granite Creek, where my uncle’s cabin stood for his cow camp. From there, the trail ran downhill a little ways and passed Baldy Lake, which was all new to me. Now that it was almost dark, I wanted to avoid camping in the timber. I remembered an open meadow on the west face of the ridge that we’d been following and suggested we hike the eighth-mile or so down to it, to camp for the night.
Continue reading →

This content is available for purchase. Please select from available options.
Register & Purchase  Purchase Only
Posted on August 1, 2014 by Billy Jim Wilson / Leave a comment

Ask Her, and Then Learn to Dance By Billy Jim Wilson This content is available for purchase. Please select from available options. Register & Purchase  Purchase Only

This content is available for purchase. Please select from available options.
Register & Purchase  Purchase Only
Posted on July 16, 2013 by Billy Jim Wilson / Leave a comment 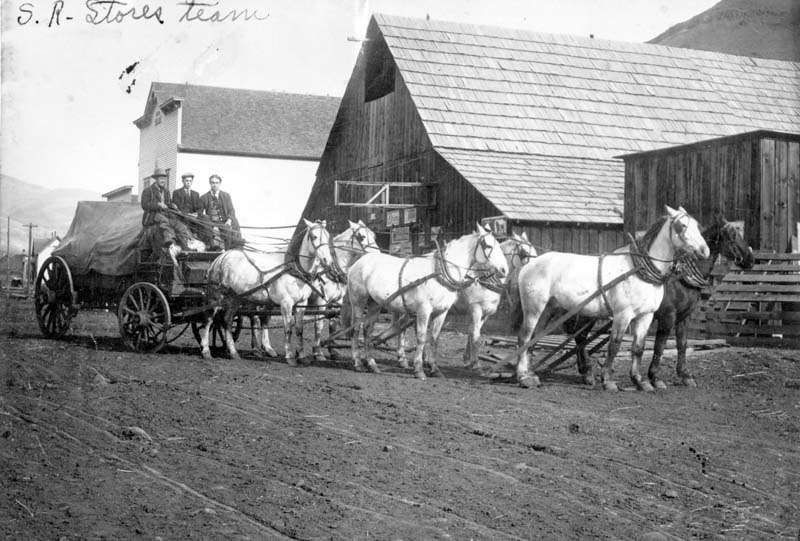 Looking at my Idaho Atlas and Gazetteer, I noticed another road going north from Grangeville, named “Old Stites Stage Road.” A light went on in my head—this must be the route my maternal grandfather, William Ellis McGaffee, followed when he was hauling freight to White Bird and Slate Creek for the Salmon River Stores Company of Thomas Pogue.

William E. “Billy” McGaffee was born near Ione, in Amador County, Calif., on November 17, 1879. He came with his parents and siblings to Grangeville in the summer of 1883, before he turned four. His father, John Sybile McGaffee, is reputed to have operated the first steam-driven thresher on the Camas Prairie. John Sybile bought a house on the north edge of Grangeville. Sometime in the late 1980s, before my mother, Murrielle McGaffee Wilson, lost her sight, she typed up for my brothers and me many of the stories she’d heard from her father. Here’s her account of how Billy got his early training to be a teamster:

When Billy was ten and Fred [his next older brother] was twelve, their father had just returned from a trip, and at breakfast the next morning he told them,‘There’s a team of black mares in the barn lot. They are yours if you can break them to work.’ The boys rushed out to the barn lot as soon as breakfast was eaten, and sure enough two young black work mares stood with halters on. They started working with the mares, currying, brushing, talking and, of course, giving them a little feed of oats. Continue reading →

This content is available for purchase. Please select from available options.
Register & Purchase  Purchase Only
Posted on July 15, 2013 by Billy Jim Wilson / Leave a comment