A Bell for the Queen

In a High-Desert Haven

When I was growing up at the Joyce Ranch on Sinker Creek, we went to church in Oreana, about fifteen miles east of Murphy on Highway 78. Local Catholics had been holding services there monthly or semi-monthly for many years in the community hall.

Mass was often held the morning after a dance, and I remember helping to sweep up beer cans and other debris before the parishioners arrived. Confessions were heard behind the piano, much to the amazement of my Philadelphia born-and-raised mother, Helen Nettleton, who wrote extensively about Owyhee County. Fran Robinson, whose grandmother was Oreana resident Frances Jayo, remembers that dancehall benches were used to construct an altar. There was always a potluck lunch after Mass.

Adjacent to the community hall stood one of the oldest buildings in the county, built about 1882 as a store by Oreana founder Michael Hyde. It was constructed of two-foot-thick bricks of native stone by John Pierson and Jim Kelly, who were paid three dollars each for their ten-hour workdays. When Michael Hyde founded Oreana in 1871, there already were cattle ranches in the area, the Oreana cemetery had been started in 1865, and water rights dated back to at least 1866.

Yet when Kirby Forman first came to Oreana in 1894, he said the store, a large two-story hotel, a saloon with a jail underneath, a blacksmith shop, and a barn all were deserted, because many people had moved away as the mines in the Owyhees closed. About 1903, Ben Hyde purchased the native stone building and moved his store and post office into it. His sister leased the hotel and reopened it.

In 1921, Frank and Frances Jayo moved into a house across the road from the store, where they raised their nine children. Their son Dick remembers that the old store later was used as a boarding house for hired men, and then as a granary.

By 1960, Albert Black owned the old store, which had been vacant for years. Albert and his wife Bonnie donated it to the Catholic Diocese of Boise for use as a church and the congregation, helped by many volunteers, mostly Catholics from Nampa, started cleaning the building. It was filled with debris, including a long-dead cow. A Jayo grandson and I were young teenagers at the time, and it was our job to remove the remains of the cow, which was mostly bones and hide. We tossed it in with the rest of the debris to be hauled away. I remember seeing daylight through the old shingle roof that was being renovated.

The main promoter and designer of the building’s conversion to the officially named Our Lady, Queen of Heaven Catholic Church was Father Herbert Merzbach, a pastor in Nampa. Many volunteers and businesses, mostly from Nampa, donated materials, time, and effort. A fireplace and chimney were added, as was a belfry. The floor was replaced, the interior renovated, and the roof was covered with red Spanish tile.

The small belfry built over the front entrance housed a bell that originally had hung in the church of Our Lady of Tears in Silver City. A story is told that when the pastor of the mission church in that mining town, Father Dempsey, was guest speaker for the opening of the newly built Dewey Palace Hotel, he told the crowd that while traveling by stagecoach to Silver City, he had been wondering how to get a bell for the church. Two of the passengers, a Jewish whiskey drummer and a Mormon bishop, gave him twenty-five dollars each toward buying a bell. The priest’s speech moved the audience to take up a collection on the spot, and enough money was given to purchase a good bell with pure tone.

After the county seat was removed from Silver City and the population declined, vandals broke into the church and the pastor moved the bell, statues, and other artifacts to the Joyce Ranch for storage. When the Sinker Creek dam burst in 1943, everything was lost except the bell, which was found with only part of the wheel broken. Father Merzbach had the wheel repaired and hung the bell in the church, where it now rings.

In 1980, the building became one of the few in Owyhee County listed on the National Register of Historic Places. Today, it looks basically the same as it did after the renovation. Oreana has only a handful of residents, but the church is the main attraction for visitors, and services are still held there once a month. 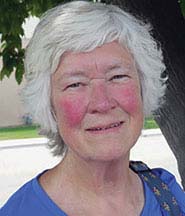 Mary Nettleton O’Malley is a fourth generation Owyhee County native who lives less than twenty miles from where her father was born in 1897, at the mining camp of Blackjack near Silver City. Her grandmother was born at the head of Reynolds Creek in 1867. Mary and her husband of fifty years live at Murphy and have a summer residence in Silver City.
View all posts by Mary Nettleton O'Malley →
ORDER BY MAIL