Posted on by Garth Profitt

The Hines brothers lived on the corner of Fourth Avenue and Fifth Street in Lewiston, two blocks from my family. They had a big three-story house with lots of bedrooms, bathrooms, and a basketball court. There was a pool table in the basement and shade trees were all around the yard. Martin and Helen Hines loved kids and their house was our hub.

Rosie lived across the street and halfway down the garage-and-hedge-lined alley. A strapping, friendly redhead of seventeen years, more than six feet tall and weighing about two hundred pounds, he whistled and leaped along, using an imaginary sword to make the “Z” sign of Zorro, his favorite character. He had an aura about him that proclaimed, “I own the day.”

He was several years older than us, but that August he took Rich, me, and a few other guys on a fishing and camping trip along the Selway, Lochsa, Clearwater, and St. Joe Rivers. 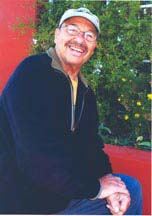 Garth Profitt was born and raised in Lewiston. He attended the University of Idaho before receiving his bachelor’s degree in broadcasting communications from Western Washington University. He is a personal fitness trainer and water aerobics instructor in Tucson, and works with handicapped adults.
View all posts by Garth Profitt →