Mountain-Climbing with the Master

As we ascended the mountain, we swung our ice axes into the snow and listened for sharp reports, hoping to get solid purchase in the ice hidden beneath. Reassuring thumps radiated off our axes, creating a drum-like rhythm that set our pace as we moved upward. We made good progress up the steep mountain couloir, and soon we were high above where our day had begun at Redfish Lake. To the left, jagged granite walls towered above us, casting a shadow over our route. On the right, a parallel and unconsolidated rock wall just waited to bombard us with silent debris. Above, a vertical tunnel created by these giant dividers led up to the exposed summit and cloud-speckled sky. The higher we moved, the more strenuous our efforts became, even as the reality of our exposure on the mountain-face intensified. This excitement fueled our drive to continue.

As a photographer and adventure-seeker, I spend my time trying to satisfy a craving that can never be fulfilled. I believe this sense of adventure was inherited from my father, Mark Weber, who introduced me to Idaho’s endless mountaineering opportunities. Mark was an accomplished mountaineer, climber, and photographer who spent many years exploring Idaho’s vast wilderness areas. His lifetime in the outdoors involved climbing, hiking, biking, backcountry skiing, and exploring [see IDAHO magazine, “On Slick Rock,” April 2013, “Climbing the Waterfall,” January 2014, and “Standing on the Snake,” June 2014]. Mark had the rare ability to venture into the unknown and come out in one piece. 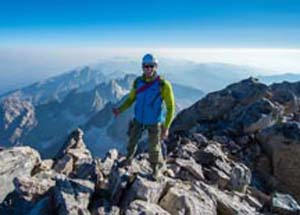 Elijah Weber has been capturing outdoor and adventure images for nearly a decade, drawing on perspective that comes from his knowledge of the subjects he photographs. Elijah, who lives in Boise, believes that a lifetime spent in the outdoors climbing, skydiving, biking, backcountry skiing, and exploring adds a dimension to his images that distinguishes them from most other photos. See more of his work at http://verticalperceptions.com/
View all posts by Elijah Weber →
ORDER BY MAIL