Pure Annoyance until He Got Lost

Story and Photos by Janice Abel

The disheveled little dog shrank back from the kennel door and cowered under a yellow lab, seeking the big animal’s protection and refusing to meet our eager eyes.

He seemed to be about twenty-two pounds, not too tiny, with dirty white fur that stood out from his body, curly and wired, as if his tongue had explored an electrical outlet. His black nose, dark eyes, and gray- tipped ears were the only landmarks in the vast, off-white field of matted fur. It appeared that grooming had not been a top priority in his previous home.

We often talked about getting a dog, though I resisted. Our annoying cat had only recently stopped peeing on my bed. What if the next animal possessed such tiresome and difficult behaviors? But a boy needs pets and friends. Perhaps this matted mess could be both. 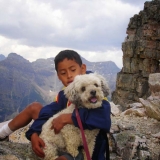 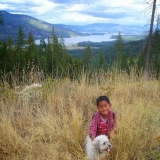 A boy and his dog in northern Idaho. Janice Abel photo. 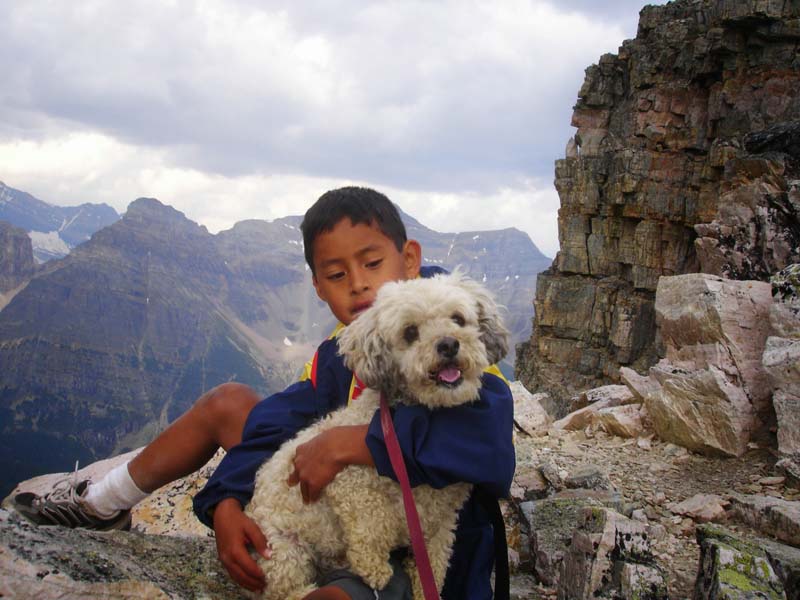 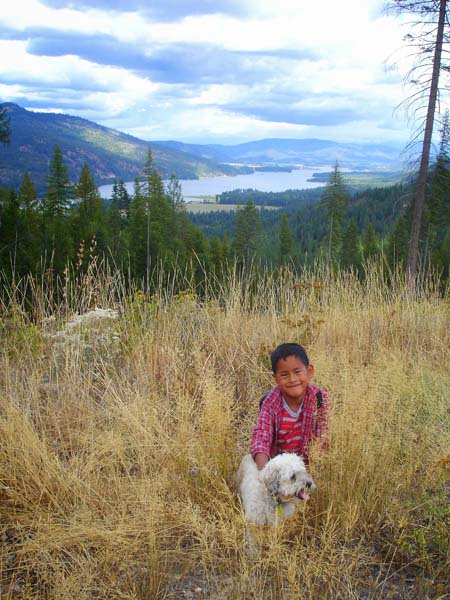 The fact that the little dog refused to meet our hopeful eyes should have been a tip-off. Then, when we took him for a walk, he ignored our offer of a treat. After half an hour of “Come on, boy,” wheedling, he finally grasped the treat gingerly in his mouth, making sure we knew he accepted it with reluctance and indifference.

It was obvious the dog did not want us, but that mattered little to our fevered brains, because we wanted him. The time had come to get a dog. Today. Excited and thrilled, we proceeded to adopt him from the friendly staff at Panhandle Animal Shelter. In all probability, they were so friendly because unloading that little dog was a great relief to their do-gooder hearts.

My son, Edison, renamed him Barney, as he came with a frou-frou French name difficult to pronounce and impossible to remember. It seemed such a genial name, reminiscent of a purple and happy dinosaur who loved everybody. This Barney weighed only twelve pounds. The fur had been deceiving. The next day we took him to a groomer, who turned him into a dignified resemblance of a poodle/Bichon/Lhasa Apso mix. While cute, he now really did resemble a frou-frou dog, but as long as he showed himself an able hiker, I would be happy.

The vet was definitely not happy. I saw concern and reluctance in the veterinarian doctor’s eyes as he considered the snarling Barney. “Could you hold your dog?” he asked.

The vet cringed as Barney snarled and exposed every one of his tiny, vicious teeth. “I don’t think so,” I responded, sitting back in my chair at what I hoped would prove to be a safe distance. We had been in possession of Barney for exactly one day. Although he was now groomed and resembled a civilized creature, he had turned into “Cujo the Psycho Dog,” which became his nickname from then on. I have a picture of Barney on a hike we took. Majestic, glacier-draped mountains tower in the background. He looks so sweet and benign. Above the photo, I printed “Beware: dog has issues,” and at the bottom, “My name’s No No Bad Dog, what’s your name?” This summed up our Barney.

There are plenty of eager young animal lovers who study to be vet techs. I was glad to let one come in and join the doctor. After much snarling and barking, the reluctant Barney received his needed shots and a brief examination, although with rectal temperature omitted. It was rather like trying to hold a tornado.

Barney used his teeth for more than eating food and snarling at the unwary. He also liked to bite. No snarl preceded his strike in these cases. The nasty episodes were quick, frightening, rapidly over, and rarely drew blood. He bit Edison several times, including four times during the first two days of his uneasy co-habitation with us. After tears and hug-filled consolation from me, my son would be back at it with Barney, playing and cuddling, while I tried to anticipate the next manifestation of Cujo the Psycho Dog. We learned not to stroke him when sleeping, nor thrust an unsolicited hand at him in the mistaken belief he was eager for an affectionate pat. There were rules, and as long as we followed them, life remained relatively drama-free.

Oddly, considering his snappish behavior, Barney behaved like a little gentleman in crowds. Because he was so cute, everyone wanted to pet him. We allowed this with advice to move slowly, and we always warned away the tiniest children. He never behaved badly in these situations. But our adult friends seldom remembered to wait and watch for suspicious eyes narrowed in speculation (indicative of a doggy mind planning an attack). Barney left many indentations on naive and imprudent fingers.

Although now groomed and giving the deceptive appearance of civilization, Barney seemed to be untrainable. The groomer told us some little dogs felt the command “sit” was unnecessary, as they were already so close to the ground. But the impossible eventually did happen. He started to follow a few commands, with the aid of cooked chicken, and my son enrolled him in a 4-H dog program. Barney began to show aptitude for agility, and even for obedience drills.

He became a star pupil during training drills, but on hikes, “Come” remained only a suggestion. In true poodle fashion, Barney loved to follow a scent, and he tracked complicated paths all over the woods, making frequent returns to check for any snacks we might want to share, and then off he would bolt again. His forays remained short until the day we hiked Chilco Mountain on the divide that separates Rathdrum Prairie from the upper Coeur d’Alene River district. As we approached North Chilco, I realized Barney had disappeared. I yodeled and yelled until my voice grew hoarse, my temper frayed, and worry started to become a tight spot in my chest. We made our way back downhill, hollering and listening for Barney’s irritating yip.

The dog was horrible. He bit almost every one of our friends. He stole food if you turned your head away. His excitement during travel resulted in screeching barks that caused humans over the age of ten to contemplate desperate leaps out of moving cars in an attempt to escape. With guarded care, the vet had only recently been able to handle the anxious dog. His difficult behavior could be perverse and exhausting, but we had grown to love Barney.

He was an awesome hiker who never quit. I would be worn out and gasping, prone on the ground, before Barney gave up a trail. No need to carry the little dog. He liked to cuddle and became my son’s bedtime companion, listening to all whispered concerns, dreams, and schemes during the long, dark nights. And he had quit biting, for the most part, although his lip still curled up at one corner if an unwise hand lunged into his space. His eyes would focus and narrow as he battled with the inner demon of desire and his new, hard-earned manners. He had begun to resist those inner demons, and Cujo the Psycho Dog appeared less and less.

Concern and fear heightened as we walked downward through the shadowed tunnel of trees that hug Chilco Mountain’s flanks. The hour was late, day deepened to dusk, and Barney had now been missing a long time. Ahead of us, the rumble and whine of a dirt bike intruded, growing rapidly louder as it crawled up the narrow trail to where we were. A biker wearing coordinated red-and-white protective gear roared into view. We stepped off the trail and he stopped.

“Did you lose a little white dog?” he asked.

“Some ATVers have him, down below. They’re waiting for you.”

Relieved, happy, excited, and not wanting to keep the considerate people longer than necessary, my son and I raced down the trail. As we descended, four men on ATVs came into view, lined up abreast in military fashion, patiently waiting for our return. Barney sat in front of a sportsman, perched on his lap, big goofy grin splitting my dog’s hairy face. We’d been frantic, and Barney had obviously been having the time of his life.

The men were dirty and rough-looking, their clothes coated with dust and mud. They were scruffy fellows I would normally be wary of, but they had gone out of their way to rescue our occasionally obedient, often annoying, twelve-pound mutt. One fellow was morbidly obese, huge bottom hanging over the sides of the machine’s weary seat. He had not shaved for many days and an oxygen tank was roped to his handlebars, the lifeline of air snaking up to his nose and circling both ears. His voice rattled out, a voice that echoed the decades over which he had marinated his throat in whisky, beer, and cigarettes.

I turned from the big man to Barney, who yipped a happy hello and declared his total appreciation for pizza.

Though I offered the men twenty dollars for their kindness, they refused. “That’s all right, lady. We all got dogs. We know how it is.”

I doubted it. These men probably had what my best friend would describe as “real dogs.” Dogs who came when called and played fetch. Dogs who only bit intruders attempting to steal fishing tackle and firearms, or who threatened their families.

Barney hopped in the car, tongue lolling out in happy exhaustion. For once silent, he curled up into a resemblance of a fluffy white pillow that belonged on a little girl’s pink bedspread, and then fell into a deep sleep as our car drove down the mountain to return home. His paws twitched as they reenacted his memories. Perhaps he dreamed of chasing ground squirrels, wild runs through the woods while my voice receded in the distance, and rough men with gentle hands. Though it was often hard to discern what mysterious and tangled thoughts swirled in Barney’s brain, I felt sure he also dreamed of pizza. 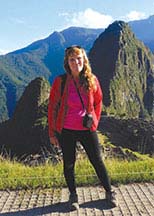 About Janice A. Abel

Janice A. Abel lives in northern Idaho with her son, Edison, an obese cat, and a semi-trained dog. The winner of Idaho Writers League’s Vardis Fisher Award for Humor Writing, she was also shortlisted for the Verbolatry Laugh-a-Riot humor contest. Her stories have appeared in prior issues of IDAHO magazine, and her work is slated for this December’s Saturday Evening Post.
View all posts by Janice A. Abel →
ORDER BY MAIL