A Foe of the Status Quo

Posted on by Bill Corbett

When I first saw Edward Paul Duren sitting at his desk in the University of Idaho’s Caribou County Agricultural Extension Office, my initial thought was, “I didn’t know the university was hiring student trainees as county agents. This guy can’t be a day older than eighteen.” Turned out, he was five months my senior. This was in 1962, when I was twenty-seven years old. I was in the farming business north of Soda Springs and had visited the extension office to pick up some rodent bait. While I was there, a county agent told me a new livestock agent had been assigned to the office, and asked if I would like to meet him. The introduction to Ed marked the beginning of a friendship that lasted more than a half-century.

Sadly, Ed is no longer with us. He passed away late last year, but he left a legacy of his work that will last for generations. This family man and all-around nice guy rose from humble beginnings on a Nebraska farm to become an inductee into the Eastern Idaho Agriculture Hall of Fame in 1996 and the Eastern Idaho Horseman’s Hall of Fame in 2006. A man of short physical stature who stood tall among his peers, Ed always had an impish twinkle in his eye, and possessed a good ol’ boy sense of humor that often revealed a slight cutting edge. He was respectfully described by those who knew him as a character.

One bitterly cold winter day after his retirement, he and I basked in the warmth of his cabin that served as an office to the small cattle ranch west of Soda Springs where he and his wife Marjean raised Percheron horses and Hackney ponies. They also took on herd cattle for the summer. I was there to chronicle his contributions to the livestock business and related industries, and as he answered my questions, I admired the numerous awards that adorned the cabin walls and other work-related memorabilia placed around the room. It was evidence that Ed’s impish character was balanced by a serious side, as reflected in his many achievements. A man never satisfied with the status quo, he spent his life trying to improve upon it. 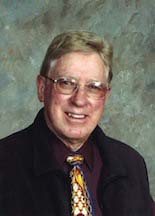 Bill Corbett lives in Tucson, Arizona.  He was a longtime resident of Idaho and a small grains producer. He writes fiction under the name Will Edwinson, and his award-winning book, Buddy...His Trials and Treasures, first serialized in IDAHO magazine, is available online and through local bookstores.  Check out his website at www.willedwinson.com
View all posts by Bill Corbett →
ORDER BY MAIL