Velma Morrison, the late Boise businesswoman and philanthropist, who entered the Idaho spotlight after her marriage to Morrison-Knudsen Company cofounder Harry Morrison, died on June 20, 2013, at age ninety-two. She was a longtime friend of Kitty Delorey Fleischman, who wrote her life story, The Bluebird Will Sing Tomorrow, in 2003. In this excerpt from the book, Velma tells the wrenching tale of her son Gary’s tragic death at age seventeen. She advised Kitty to ask whatever she wanted about the incident on the night they talked about it, because they would never discuss it again. Velma steadfastly refused to read this chapter. The information was verified through newspaper reports, files at the Boise Public Library, and family sources.

Even from her earliest years, Velma knew all too well that, for all the good times and good things that came her way, life had its share of tears.

She has suffered more than her fair share of bumps and bruises along the way.

It’s hard to imagine anything more painful than losing a child.

Velma lost her younger son, Gary, in the kind of needless tragedy that shakes a mother to the depths of her soul and sends her to storm the heavens, begging an answer to the simple question “Why?” over and over again.

There is no answer except what her faith tells her it was God’s will, and it is hers to accept. Acceptance closed the wound, but the scar never heals. 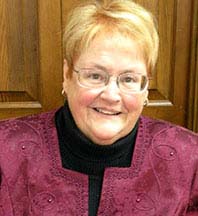 Kitty Delorey Fleischman met and fell in love with a red-headed gold miner in Nome in 1979, and until then, the sum of her knowledge of Idaho was: Frank Church, Cecil Andrus, and Idaho potatoes. Moving to the Gem State in 1981 to marry the man of her dreams, her life changed, and she found the place where she'd always wanted to be. Kitty was a teacher, and she has written and photographed for United Press International, was a founder and co-publisher of the Idaho Business Review, wrote Velma Morrison's memoirs, The Bluebird Will Sing Tomorrow, and is the publisher and editor of IDAHO magazine.
View all posts by Kitty Delorey Fleischman →
ORDER BY MAIL