A Descendant of Its Founders Tells the Tale

Both sides of my family were pioneers in north-central Idaho. My mother was a Bieker, the founders of Ferdinand. My dad’s mother was a Nuxoll, who helped to found Greencreek and Cottonwood, where I live with my family. The Biekers and Nuxolls, both from German stock, came out here from Indiana and Illinois, respectively, because they thought the ground on their farms was going fallow, and the size and availability of homesteads back there had greatly decreased, to forty acres compared to 160 acres here.

My great-grandfather on my father’s side, Herman Henry Nuxoll, Sr., surveyed a large part of this region in the mid-1800s. My mother’s great-uncle, F.M. Bieker, was an Indiana farmer who became very prominent as the principal founder of Ferdinand.

In 1950, at age eighty-three, he wrote extensively about his career in an autobiography. He typed one manuscript for each of his twenty-seven relatives. Some of the texts were long and some shorter, depending on how much he liked the person. I have two long ones, and much of the following story of Ferdinand’s early days comes from the firsthand experiences that F.M. Bieker recorded.

In Indiana, he deemed that weather was the cause of his intestinal problems and the blues, which were exacerbated by a broken leg. Chronically ill his entire life, he decided he needed a new farm with better weather, but there were limited prospects in the area. What’s more, his brother Joe wanted to marry and run his own farm. On June 3, 1889, F.M. struck out in search of new land. He headed first to Minnesota and then to North Dakota, but both states had endured a dry year. He moved on to Yakima, Washington, only to discover that all the land he would want to homestead was taken. But he heard about a new Catholic church being built in Keuterville, about five miles from Cottonwood, with lots of good land and homesteads to be had. He went to Walla Walla and Pomeroy, Washington by train, then on stagecoach to Lewiston and to Cottonwood. 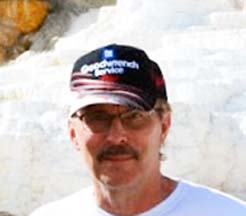 Rod F. Arnzen was born in 1953 to Francis J. and Dorothy Arnzen. Raised in Cottonwood, he went to college at Idaho State University and received a B.S. in pharmacy in 1977. He owns Arnzen Drug in Cottonwood and Kamiah. Rod married Kathi Gardner in 1977. They have two children, Rebecca and Jesse, and four grandchildren, Abby, Daytona, Holly, and Trey.
View all posts by Rod F. Arnzen →
ORDER BY MAIL