A Penny for the Baker

Posted on January 1, 2021 by Michael Feldman

Story and Photos by Michael Feldman

“How did you bake such delicious bread?” I asked my friend Thomas Wilson, who owns a small farm in Fruitland. I was visiting him, his wife Mary, and their son Taylor in the spring of 2017.  Thomas had just offered me a piece of fresh, homemade raisin bread. “Is there a special recipe? Maybe something traditional?”

“No, just simple bread,” he answered.

“Then why can’t I find this in the city? There must be a secret.”

“Actually, no. Raisin bread is very simple,” he insisted. “Regular bread is mostly made of flour and water. All the other ingredients are optional and can be changed to fit your taste. I add raisins and a little honey to sweeten the bread and make the taste similar to cake.”

I know nothing about baking and it seemed like magic to me. Thomas and Mary both bake bread often, and when he was in his late-twenties, he worked as a baker in a pastry shop. He explained that bakers experiment with different types of ingredients and techniques. For example, he said, some suggest letting the bread sit for twelve hours in the refrigerator after rising. This increases flavor and texture and develops the air holes that you find in store-bought artisan bread.

When I kept pestering him with questions, he at last decided to show me how it’s done. Baking a new loaf was a long process, especially because I kept asking him to explain everything. I suppose that was impolite, but the result I got was a recipe of Idaho country raisin bread baked just as it was done long ago—a simple bread that tastes better than any other. 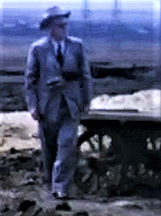 Michael Feldman studied agriculture and has worked as a farmer and writer. He says his work has been published in Acres USA, Rural Heritage, Farming Magazine, Farmers Weekly, Permaculture Magazine, and Mother Earth News, and he has a column in Poultry World. He lives in Brooklyn.
View all posts by Michael Feldman →
ORDER BY MAIL