Posted on by Ethyl Thomason Rodden

Which Cowboy Will She Wed?

The author, born in Parma in 1920, celebrates her ninety-ninth birthday on June 12. The eldest of eight children, her parents both came from out of state, married on a property north of Buhl in July 1919, moved to Parma, and later to a ranch near Gooding. Ethyl went to high school in Shoshone. She finished writing her memoirs in 1998, and in this excerpt, published for the first time with permission, Ethyl recalls what it was like to date as a rural Idaho teenager in the late-1930s.

As I try to think back to my dating days, it’s hard to recall just what years I went with who. This is bad! A person would think I was a party girl, as many boys as I went with. Not so, but I seemed to be lucky to have so many friends. I dated Dick Hayes, a sheepherder for the Gooding ranch. His sister-in-law was a cook there and his brother worked on the ranch. Edie [the author’s sister] used to date Dick’s brother-in-law, “Whitey” Drain, at the same time. We went to shows and dances at the grange. Dick was a bit more serious than I was, so we finally parted ways. I went to the show once with Whitey—Edie, where were you ? Probably had another date with someone.

Edie and I double-dated: she with Max Allen and me with a Basque sheepherder, Julian Bilbao, who used to herd his sheep not far from our house. He knew to keep them at a certain distance away from our ranch, though. He would be in big trouble with Dad, who was always cussing the herders about bringing their sheep so close. The sheep would eat and trample out the grass close by that Dad wanted for our milk cows. He almost came to blows with one who argued. He had accused the boys of picking up one of the stray lambs and bringing it home. Dad called him a few choice names and told him to keep his sheep up in the hills away from our ranch. When he wouldn’t go, Dad reached for the gun above the door and Mother intervened and the guy thought it was time to leave. Dad had a temper when being forced. 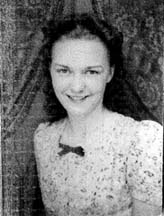 Ethyl Thomason Rodden Is the eldest of eight children born to Milton and Dolly Thomason. Raised primarily in the Gooding area, five of the children survive, all in their nineties and still going strong. Ethyl says she wrote her life story, excerpted in this issue, “for my children and their children to enjoy.”
View all posts by Ethyl Thomason Rodden →
ORDER BY MAIL