Posted on September 1, 2017 by Shawn Willsey

Disguised by Volcanoes and Challis

Just before one drives south across the Perrine Memorial Bridge spanning the immense and scenic Snake River Canyon near Twin Falls, there is a sign that reads Geologic Site Ahead. I vividly remember reading that sign for the first time in the spring of 2004. Delighted by the grandeur of the spectacle that is the canyon, I quickly made my way to the overlook and, at that time, the quaint visitor center near the bridge.

However, my initial excitement faded as I realized that there was no geologic information whatsoever at this fantastic vantage point on the rim of the spectacular canyon.

Over the ensuing years, as I made Twin Falls my home and began my career as a geology professor at the College of Southern Idaho, I became more acutely aware of the scarcity of information available to the public regarding the region’s geologic treasures. Though geologists have studied southern Idaho’s rocks and landscapes for well over one hundred years, their findings and conclusions are stored in scientific journals, technical reports, and detailed geologic maps that are difficult for the layperson to locate, access, and decipher. This book attempts to bridge the gap between geologists and the interested public by relaying a collection of fascinating stories told by southern Idaho’s rocks and landscapes . . .

Much like a detective, a geologist relies on available evidence to reconstruct the history of past events on Earth. The work can be frustrating when the trail of clues disappears. Sometimes little evidence exists for even the most massive and dramatic geologic events, a testament to the Earth’s unrelenting forces of erosion and deposition operating over millions of years. Such is the case at Leaton Gulch, an unassuming little canyon tucked into the hills east of Challis.

From the parking area [off Leaton Gulch Road], take a look at the landscape around you. Does anything stand out? Even though the hills and gullies look like any others in this arid region, you are standing at ground zero for one of the largest meteorite impacts in Earth’s history. Yet the scene before you shows no obvious evidence of this violent event. Where is the impact crater? Why don’t meteorite fragments litter the ground? How could a large meteorite strike this area and leave no apparent trace? Let’s begin our exploration of this fascinating event by examining the dynamic process of impact and the history of impact science.

A meteoroid is a rocky space fragment. If it passes through Earth’s atmosphere, it is known as a meteor or, more commonly, a shooting star. If the meteor actually hits the surface, it’s called a meteorite. Most meteors originate as asteroids, small rocky fragments in our solar system left over from the collisions of material that formed the planets and moons. Large meteorites crash into the Earth at tremendous speeds, about one hundred thousand miles per hour, generating immense forces equivalent to the combined energy of ten million nuclear bombs.

Upon impact with Earth’s surface, a meteorite compresses and fractures the crust, sending shock waves radiating out over long distances. The impact excavates a huge, bowl-shaped crater many times larger than the meteorite itself. Exceptionally large meteorite impacts often create uplifted peaks in the center of the crater, the result of Earth’s crust elastically rebounding upward in response to being severely compressed. The intense pressure of an impact exceeds the strength of both the meteorite and rocks within the target area, causing the meteorite and much of the impacted rock to vaporize or melt. Fragmented and melted rock is tossed out of the crater, blanketing the area around the crater with broken rock and debris known as ejecta. 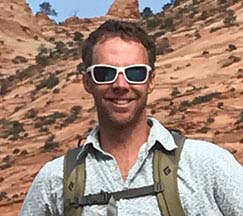 Shawn Willsey is a geology professor at the College of Southern Idaho. He is also a licensed professional geologist, climbing guide, and whitewater guide. He enjoys traveling and developing interpretive materials for Idaho’s fascinating geologic features. He lives in Twin Falls with his wife, Erika, and their three children.To order a signed copy of his book : https://squareup.com/store/shawn-willsey. To follow Shawn and the book: https://www.facebook.com/GeologyUnderfootinSouthernIdaho/
View all posts by Shawn Willsey →
ORDER BY MAIL