When Sun Valley celebrated its fiftieth anniversary in 1986, the resort hired my dad to build a snow sculpture of its logo.

The sculpture was such a big hit that he has built one in front of the Sun Valley Lodge every year since then.

My dad, Mark Sheehan, is an architectural metal sculptor. I started hanging out with him as he built the sun in 2002, when I was two years old, playing in the snow and helping to hold the hose. By the time I was eight, I started being really helpful by removing blocks of snow that were cut away from the sculpture by pushing them into the pond, which is still my favorite part of the process. I also mix slush and pack snow onto the face to add detail. Every year, I look forward to making a snow sculpture with him.

The family, Mark and Sean Sheehan and Lisa Phillips with a sun ice sculpture. Photo by Nils Ribi. 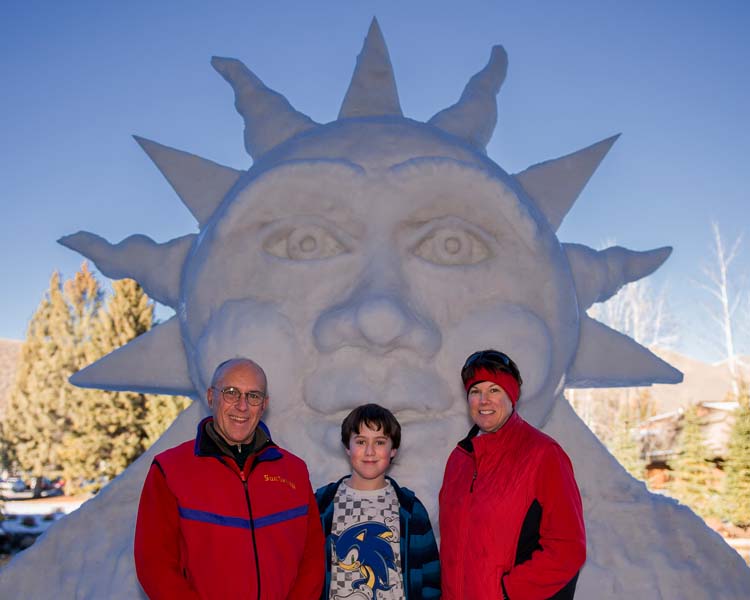 One of the diagrams Mark made to help create the work. Courtesy of Mark Sheehan. 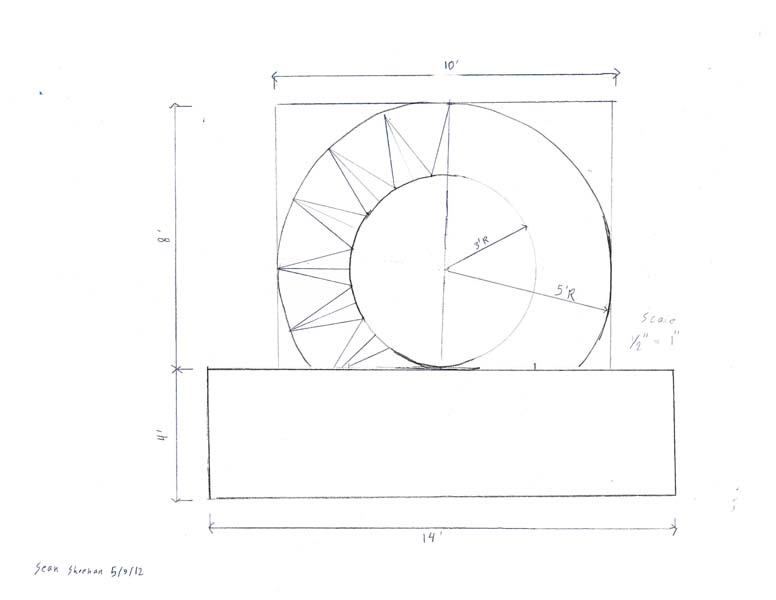 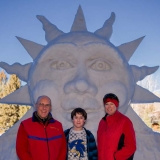 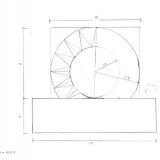 In order to help build it, I have to be prepared and properly dressed. My dad calls it the layering system, which allows me to take off clothes if I get too warm, and put clothes on if I get too cold. Wearing waterproof snow pants, jacket, and boots helps keep me somewhat dry and warm, since this is a very wet process. Neoprene gloves let some water in, but just like a wetsuit, they keep the water warm. I always bring more than one pair with me.

The best time to build a snow sculpture is when the temperature is between ten and twenty degrees Fahrenheit. When it gets close to thirty-two degrees, the snow becomes soft and can collapse. Usually, we start the sculpture in December or January, after a heavy snowfall. If we don’t have enough clean snow, the dirt in the snow will attract solar heat and melt it faster. We also have to have consistently cold temperatures for the sculpture to last more than a few days.

Workers for the Sun Valley Maintenance and Grounds Department build a rectangular wooden box with dimensions of fourteen-by-fourteen-by-eight feet, which acts like a concrete form to mold the snow into a rectangular block. The form doesn’t have a bottom. The workers shovel snow into the box and add water to glue it, being careful not to add too much water, which could melt the snow. They boot-pack it down, let it freeze overnight, and then build another bottomless wooden box with dimensions of three-by-ten-by-eight feet on top of the first block of snow and repeat the filling and packing process. After another night of freezing, the workers disassemble and remove the wooden forms, which are re-used every year.

Then my dad and I begin laying out the sculpture’s dimensions. On the top block of snow, he draws a ten-foot circle with a six-foot circle inside it for the face. Both circles are centered on the bottom block of snow and are drawn to scale, using a screwdriver as a compass point, a cord as a compass, and a permanent marker. The ink is not soluble in water, so it lies on the smooth surface of the ice just fine. He uses a chainsaw to cut the outer circle. Next, with the help of a cardboard template, he traces twenty-four-inch-long rays around the outside of the six-foot circle and cuts them with the chainsaw. To map out the face on the inner circle, he refers to the scale drawing of the logo to chalk a graph onto the six-foot circle, and then draws the features onto the snow with a marker. The nose is the center point of the circle. The lips are a foot below the nose and each eye is one foot up and one foot over from the nose.

With the chainsaw, my dad cuts the outer circle and the rays. To fill in the facial features, I put on my neoprene gloves and mix snow and water in a bucket to get the correct consistency of slush. I have to add just enough water to make the mixture wet enough to stick but dry enough to harden. Every so often, we step back to make sure there aren’t any mistakes. We check that the mouth is level and the eyes are not lopsided. I have to chip any dirt out of the snow to keep it clean and patch the holes with more slush.

I use a pickaxe to shape the foundation into a sloped base so people cannot climb up onto it. Depending on the temperature, we take turns hosing the whole thing down as often as possible to create an icy exterior that can last for a while. The colder the better.

For upkeep, we revisit the sculpture often to fix broken rays, patch holes that have been kicked, and brush off snow after a snowstorm. Sometimes the sculpture lasts until February. During the warm months, I can hardly wait until it snows again so we can build another one. 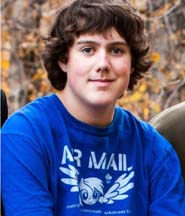 Sean Sheehan was born in Sun Valley. He’s thirteen, and this is his first published story. His passions are drawing, digital designing, Dungeons and Dragons, and long- boarding. A home-schooled student in eighth grade, his favorite subject is math “on a good day.” Sean enjoys the peace of his hometown of Bellevue and volunteering at the local animal shelter.
View all posts by Sean Sheehan →
ORDER BY MAIL