Posted on by Chyrle Bonk

Where Rivers Meet and Lines Are Cast

Before I moved to the Orofino area four years ago, Ahsahka was to me just “that dam place,” a name given to it by a friend’s two boys. The name is fitting, considering that Dworshak Dam creates a large concrete backdrop for the unincorporated community, population about 120. Ahsahka is also home to Dworshak National Fish Hatchery. As a grade-schooler, I visited both the dam and hatchery with my class, learning about hydroelectricity, fish biology, and ecology. But at the time I didn’t completely understand the significance of this area to the valley and surrounding communities.

Ahsahka is actually a Nez Perce word meaning “the place where two rivers meet.” This is also fitting, as the town lies at the confluence of the main Clearwater River and its North Fork, about three miles downstream from Orofino. The Ahsahka area was very important to the Nez Perce people, as both rivers were abundant with fish and the climate is mild. Immense populations of deer and elk roamed the valley, and the rivers provided fast and relatively easy transportation.

The Nez Perce mastered the construction of dugout canoes made from large logs, using fire to speed the process. They were so good at this craft that in 1805, the Lewis and Clark Corps of Discovery gladly accepted the Nez Perce’s help in getting them to the Pacific Ocean. That September, the Corps of Discovery first met with the Nez Perce on the Weippe prairie. Many of the expedition members were sick and hungry and the tribe fed and cared for them. For instruction in building the canoes quickly and efficiently, the newcomers were led a place that would become known as Canoe Camp. The corps left their horses and other extra gear in the care of the Nez Perce as the expedition continued down the Clearwater towards the Pacific. A Canoe Camp historical marker is now located on the outskirts of Orofino, directly across the river from the Clearwater Fish Hatchery and Ahsahka. There is a replica of one of these dugout canoes on the grounds. This site is so scenic that my husband Scott and I had our engagement pictures taken there. 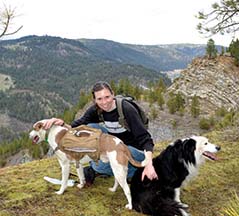 Chyrle Bonk is a part-time veterinarian and cattle rancher. She and her husband Scott use their home outside Orofino as their base camp for all of their outdoor adventures, and it’s also where all her animals live.
View all posts by Chyrle Bonk →
ORDER BY MAIL