Posted on by Michael Vogt

Story and Photos by Michael Vogt

Caldwell native Dale Smith’s pride in his great-great uncles, the Johnston brothers, led him to study their lives closely, and he even portrays one of them when giving visitors a first-person tour of a cabin the three built during the Civil War. In 1934, the cabin was moved by the Native Daughters of Idaho to Caldwell’s Memorial Park, where it is displayed along with other cabins as part of the Van Slyke Agricultural Museum, which also has a collection of farming equipment. I joined Dale’s tour of the cabin a while back, during which he told the following story about his ancestors.

Tom and David were the first of the two brothers to come to the Caldwell area from Missouri in 1864, Dale said. Each of them filed on one-hundred-and-sixty acres, and they built an eight-by-twelve-foot cabin west of Caldwell. It was in what is still known as the Dixie Valley or Dixie Slough. The valley’s northern point is roughly midway between Parma and Notus. Its eastern boundary follows the Boise River down to the western outskirts of Caldwell. Its southern boundary extends down to the top of Lake Lowell. The western boundary includes Greenleaf and continues west toward Wilder but then veers up to the area’s northern reaches. About a year-and-a-half after the arrival of the two brothers, Dennis joined them from Missouri. He also filed on one-hundred-and-sixty acres, which brought the land holdings of the three to four-hundred-and-eighty acres suitable for raising cattle and grain. 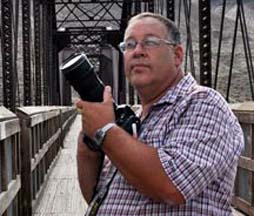 Michael Vogt is a retired Idaho Press-Tribune photographer who likes the outdoors and capturing the scenic beauty of the state with his camera. He also likes to shoot many sporting events in the Canyon County area, including The College of Idaho football.
View all posts by Michael Vogt →
ORDER BY MAIL