Bewitched by the Gooney Bird

A Boy, A Plane, and an Airline

At sunset in late March 1965, six weeks shy of my eleventh birthday, I wrestled with a handful of stubbornly anchored weeds in a garden choked with them. My younger brother Will was fighting his own battle in another garden, out of sight. The earth beneath my hands and knees had the cool, fragrant moistness of early spring in Idaho’s Treasure Valley. Fifty yards away, down among the walnut and birch trees and wild rosebushes, Crane Creek babbled the urgent song of mountain snowmelt. From my pocket transistor radio, Herman’s Hermits pleaded, “Baby, baby, can’t you hear my heartbeat?” over the airwaves of KFXD Radio, then in Nampa. The sun had just disappeared, turning the neighboring foothills into hulking silhouettes hung on a background of flaming orange and gold. Looking up from my weed-pulling work, the breathtaking scene ignited in my young mind an image of flying above the clouds, bathed in the very sunset I was watching. Looking down on the world, from a seat in a real airplane. But not just any kind of airplane—a very special, very old one. Surely, this dream would come true, I prayed . . . if only I worked hard enough.

Born just eleven months apart, Will and I shared a room—and just about everything else. Our world didn’t extend much beyond our hometown of Boise, which was then a smallish state capital of fifty thousand souls. Our family’s black-and-white TV served up two channels until sign-off at midnight. The TV had made us vaguely aware that the outside world was shaking itself apart in perplexing convulsions of societal change. We’d seen a presidential assassination, riots, “escalation” of a distant war, bomb shelters, long hair on boys, short skirts on girls, and cars without tailfins. But the revolution that most disturbed, yet entranced me, was in the sky—jet airliners.

My brother and I shared a dream of flying—something that most Americans in 1965 had never experienced. Like everyone, we were awed by the allure of the sparkling new jets that graced magazine covers, which boldly heralded the arrival of “the jet age” and “the jet set.”  We had seen jet airplanes before. For a few years, we occasionally saw one pass many thousands of feet above us, etching a long, white contrail in the blue as it leapfrogged over our valley, and our state. They were always so high, we couldn’t tell whether we were looking at an airliner or a military plane. And then, in October of 1964, United Airlines introduced its first tentative jet service to Boise. Thus began a period of wondrous and uneasy transformation for Will and me.

Because both our parents were superb storytellers, I had developed an unusual sense of nostalgia for the era of their young adulthood, which coincided with aviation’s “Golden Age,” the 1930s. And so my youthful dreams of flight came to be largely fixed on the Douglas DC-3—a magnificent trailblazing airplane whose glory days were long past by 1965. Once the incomparable queen of the world’s commercial airways, and then the troop- and cargo-transporting C-47 that helped win World War II, the “Gooney Bird” was now scraping by in her sunset years. 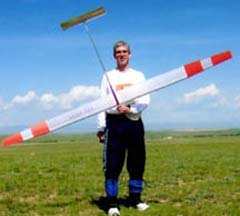 Peter D. McQuade lives with his wife, Marilyn, in Colorado Springs, but his heart never left Boise, where he grew up. An aeronautical engineer, professor of astronautics and space systems engineering, and retired Air Force officer, he’s an avid student of aviation history and loves to build and fly competition model gliders.
View all posts by Peter D. McQuade →