Posted on by John Crockett

How Idaho Research Changed the World

In the 1990s, when I worked in the Energy Division of the Idaho Department of Water Resources, I was fortunate to witness a creative University of Idaho professor’s vision turn into a worldwide industry. At the time, our country’s reliance on foreign oil imports made the U.S. Department of Energy (DOE) considerably interested in new fuel research being conducted at the university. Our office had good funding opportunities through DOE, and my job was to liaise between the federal body and the school’s biodiesel program. Our division did some great things back then, but nothing greater than helping to develop biodiesel.

Most people in Idaho have heard of biodiesel but I’ll wager not many know it’s now an important international industry that was developed at the University of Idaho. Biodiesel is a substitute or additive for petroleum diesel, made by converting vegetable oils, animal fats, and recycled cooking greases into fuel. It differs from the other major biofuel, ethanol, which uses carbohydrates as its feedstock rather than oils and is mixed with gasoline rather than petroleum diesel.

Oil or fats are mixed with an alcohol and a catalyst to cause a chemical reaction that produces biodiesel and glycerin. For every gallon of oil or fat used, one gallon of biodiesel is produced. The cost is competitive with diesel fuel, and using biodiesel requires no engine modification, but achieves significant emissions and performance benefits.

In 1979, a Palouse farmer asked the University of Idaho’s Dr. Chuck Peterson if vegetable oil could be used to run his tractor. This wasn’t such an odd question, considering that when the diesel engine was less than twenty years old it was operated on peanut oil at the 1900 World Exposition in Paris. Chuck purchased cooking oil at the local grocery store and launched the research that eventually would lead to the commercialization of an environmentally friendly alternative diesel fuel. 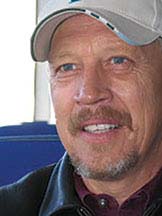 John Crockett holds degrees in mechanical engineering and environmental science from the University of Idaho. He worked in renewable energy and alternative fuels in Boise for thirty-five years, about half as an engineering consultant and half with the Idaho Office of Energy Resources. In recent years, he joined friends in Moscow as communication coordinator for the university’s Biodiesel Education Program.
View all posts by John Crockett →
ORDER BY MAIL