Posted on by G.T. Rees

Story and Photos by G.T. Rees

I climbed over one last deadfall on the long-neglected trail and pushed myself up the final step to the saddle on a commanding mountain ridge.

It was cold, the temperature dropping as the sun began to break over the Cabinet Mountains in late September and let out a puff of breath to test the wind direction. I’d hiked an hour in the dark to get to this spot overreaching a remote mountain meadow where I was certain elk would be bunched up like cattle with at least a dozen bruiser bulls competing for dominance of the airwaves with their primordial screams. Just then, a bull confirmed my thoughts with a mighty bugle from somewhere across the forest. Ah, it was going to be a good day. 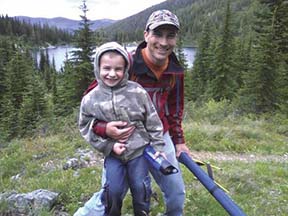 G.T. Rees considers himself very lucky to live in northern Idaho with his wife and two children, where he’ll never run out of wild places to explore. Since his earliest memory, he has been captivated by the outdoors and everything wild, and he hopes to convey that joy to others through his humorous outdoor adventure stories. His work has been published in numerous magazines. Find out more at: authorgtrees.com.
View all posts by G.T. Rees →