Posted on by Rob Moore

What It Took to Homestead

William E. “Billy” Kauder was 105 and Idaho’s oldest man when he gave the following interview to Rob Moore in 1974. Born in 1868 in Illinois, at age twenty-one he moved from Iowa with his parents to Dayton, Washington, and then to what was known as the Cedar Creek country in Latah County northeast of Southwick, where he and his father both took up homesteads. In 1918, Billy married Anna Craimer. Billy, who was a carpenter and farmer, voted in twenty presidential elections. He died in 1975 and is buried at Pine Hill Cemetery in Southwick. This transcript about his settling at Cedar Creek has been edited and rearranged for clarity. It was coordinated by the Latah County Historical Society, and the transcripts later were scanned and made fully text-searchable at the University of Idaho.

Father had an awful poor heart and the doctor told him that if he’d go West, if he’d live among the pines, that he would live ten years longer. There was only the three of us in the family, Father and myself and Mother. And we come in 1890 and he died in 1900. We come on an immigrant ticket, it was a reduced rate. Immigrant train. I think there was eighteen cars and they were all full. We bought our ticket the 17th day of March, St. Patrick’s Day, and we come West. That Nez Perce Reservation and the Camas Prairie Reservation all opened for homestead. Why they wanted them all settled up by whites is a mystery to me yet. They’d better left that with the Indians.

Father took up a homestead right in the neighborhood. It was a nice piece of land but it wasn’t much, it was only about forty acres. It laid nice and was in a nice shape. And wasn’t much brush on it. A nice piece of land but it was kind of bottled up, that is, other places was taken all around it. Father being of such a weak heart, why, we didn’t want to stick ourselves in too much of a brush patch.

We put up the [cabin] framework that fall and then it snowed us under and we couldn’t work anymore until the next spring. [That winter] there on the homestead, we put up a box house. I don’t know, it was I think sixteen feet square. Just had a fireplace in one end of it, a cook stove, and a couple of beds in there. Oh, we fared pretty good. 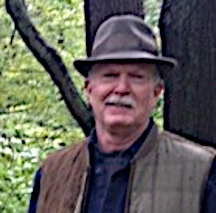 Rob Moore helped to conceive and launch the Latah County Oral History project in 1974. He and Sam Schrager, with a few others, recorded the memories of the first wave of settlers in the 1870s and afterwards. In 1988, Rob moved to Chicago to get a Ph.D., planning to return to a farmhouse on Little Bear Ridge, but family and professional opportunities intervened. He went on to lead a Chicago marketing agency.
View all posts by Rob Moore →