Posted on by John M. Larsen

No sooner had I settled in at my desk to get the feel of things on my first day in 1994 as the City of Marsing’s superintendent when the door burst open and Gene Showalter stepped in with, “When are you going to do something about them danged dogs?”

Gene, a member of the Marsing City Council, evidently felt the need to direct my priorities right away. I didn’t know specifically what he was talking about but generally I had a good idea. I had lived around Marsing most of life and remembered the days when the problem began and critics called the place, “Dog Town.”

That was during WWII, when it seemed every family in town had at least one dog. By itself, this was not a bad thing but there were other circumstances, centered around wool. Back then, the area was populated by a large number of sheep ranchers. Synthetic materials had not yet been well developed and wool was especially valuable because it was the principal material used for military uniforms. Anything that furthered the war effort took top priority, which is a big reason why our valley held large herds of sheep. 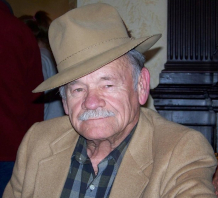 John M. Larsen came to Idaho in 1940, went to high school in Marsing, and graduated from the College of Idaho. His parents were co-founders the Owyhee County Historical Society and from 1998 to 2018, John was either the society’s president or a board member. He was superintendent of Marsing and later consultant for the city until 2018.
View all posts by John M. Larsen →