No Candy or Soda Anymore

In the old days, when we were about halfway to Nampa from our home at Glendale south of Melba, we went through the town of Bowmont. We traveled on a dirt road to Melmont Road, and then followed a road that first would be called South Powerline and later Track Road, because it ran parallel to the railroad. On one of the little curves, we went by Turkey Tom’s place, although I never discovered why it had that name.

Bowmont was a good respite for us. The community had two grocery stores and a couple of gas stations, a church, a Grange Hall, and a two-story schoolhouse. It had a post office and all the services demanded by a healthy village. We could get a candy bar or a soda for the rest of the trip to the city. Nowadays, people still live in the area, but the townsite itself, its shops and other public facilities, have long since disappeared.

In the old days there was always a column from each community in Nampa’s Idaho Free Press (this is before it was combined with the Caldwell News-Tribune and became the Idaho Press-Tribune). The columnists wrote what I always called “the Sunday dinner news,” which I read avidly and would discuss in detail on occasion with the Bowmont correspondent, Betty Emmert Martineau. For a few years, the Free Press had something called “The Weekender,” for which Betty wrote a nice history of Bowmont that helped to educate me about the town.

Named for J. F. Bow, who cut the site out of a 160-acre plot he had carved from the sagebrush in 1911, Bowmont was along the Boise Nampa Owyhee ( BNO) Railway running from Nampa to Murphy. About ten miles south of Nampa, it was a connecting link from the newly homesteaded area south of that city, which was another reason why it became a busy village. J. F. Bow served as mayor of Nampa from 1921 to 1923. 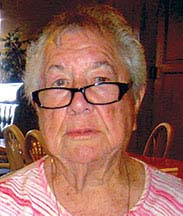 Madge Cook Wylie came to Melba when she was eight years old and has lived there ever since, except for nearly three years in West Virginia after she got married. She wrote for the Idaho Free Press and the Idaho Statesman and was a correspondent for the Kuna Melba News for sixty years.
View all posts by Madge Cook Wylie →