Posted on by Nick Ballenger

Story and Photos by Nick Ballenger

On a late-October morning in 1983, my Boise apartment shook me awake. I tried to reason through the strange sensation with the thought, I’m hung over and still a little drunk. But something rolled off a table and a suspended houseplant was swinging from my ceiling. As a geology student who had recently learned about the P and S waves of earthquakes, I realized we were in one. I rushed out my back door to look down the railroad tracks, trying to discern if they were snaking in the waves, but didn’t see anything unusual.

My backpack was already loaded for a weekend field trip. There was no time for coffee. I put the pack on and marched south across the Boise River footbridge and through campus to the geology department’s parking lot. We had been scheduled to visit some mines in Nevada, but I learned that we were going to the epicenter. “You don’t want to miss this,” my professor, Spencer Wood, said with enthusiasm as he helped the students load backpacks into the back of a van. He moved with a sense of urgency.

This was always my favorite time in a college course: riding in a rattling old van with a seasoned geologist at the wheel. Spencer waved and pointed as he explained how the parts of the planet that we could see had formed. On this trip, his impromptu lecture included comments about the once-in-a-hundred-lifetimes opportunity ahead of us. We budding geologists leaned forward to better hear Spencer over the road noise as we bore down on an earthquake. To me, this trip had the air of our destiny. 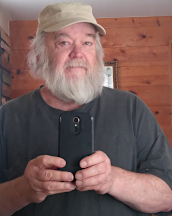 Nick Ballenger is an Idaho native who early in life helped his father build a cabin in the Caribou National Forest. Nick, who earned a Masters degree from Boise State and was an Army medic, now turns his hobbies and interests into occupations. He currently is building a cabin in central Idaho.
View all posts by Nick Ballenger →