Posted on by Dona Kay Faubus

I met her at the swimming pool. We were about the same size, but she was blond with blue eyes and I’m a brunette with brown eyes. We were both small. I was thirteen and she was twelve during the first of the two summers we camped, for probably a little over a month both summers. This was during the 1950s, a calm and innocent time. Bubbles and I rode our bikes—actually, I rode my brother’s bike, because mine was really old and his had three speeds—all over Moscow, and I mean all over Moscow, with our little dogs running along behind us. Mine was a cocker spaniel and Bubbles had a Pekingese. We still went swimming a lot, too.

When I found out Bubbles didn’t know how to ride a horse, I decided we should ride our bikes from Moscow out to Grandma’s farm so she could learn. She lived at Flannigan Creek, about fifteen miles down the highway and over a mountain through a pretty granite pass, and then a left turn at the town of Viola, and then down dirt roads to Grandma’s. I had ridden horses into Moscow from the farm and back with my Aunt Jamie but had never gone out there on a bike. The horses belonged to my aunt, who was in the Air Force when Bubbles and I made friends, so they were available to ride whenever I wanted.

My family lived in a house on a hill not far from the University of Idaho, which even then had many foreign students and held a lot of different events. This meant that even though Moscow wasn’t as  advanced in some ways as larger towns, it was definitely an interesting place to live. I loved the public swimming pool and we had two movie theaters, both of which I worked at as an usherette in my high school years. I sang in the choir at our sweet little church on the corner. The town had no crime to speak of but despite how cool Moscow was, I always wanted to be at my grandparents’ farm. The horses were a big part of that. 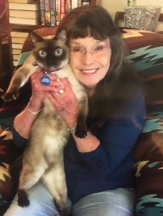 Dona Kay Faubus spent her childhood in Moscow with “super parents,” Neva and Perry Farnam. The family’s relatives were pioneers in the 1800s. She lives in Texas but says her heart and roots are in Idaho. She misses waking up to a white world of snow, playing in it, and breathing the sweet mountain air of Idaho, always.
View all posts by Dona Kay Faubus →

One Response to Bubbles