Posted on by Robert Jenkins

The Day the Big Load Crashed

Story and Photos by Robert Jenkins

Photographing a heavy-lift transporter as it came around a broad curve on the highway just west of Shoshone, I moved the car up to stay ahead of the vehicle, looked in the rearview mirror, and saw something that scares me even to this day when I think of it.

This was in the spring of 2011, when a very large and extremely heavy electrical transformer was being moved by road and rail to an Idaho Power sub-station near Shoshone. Weighing in at 450 tons, the transformer was forty feet long, fourteen feet wide and about eighteen feet tall. Built by a South Korean company, it had been shipped through the Panama Canal to a seaport in Texas. From there it was loaded onto one of the largest railroad cars in North America for a long and slow journey to its rail destination near Gooding. Known by railroaders as a “high-and-wide” load, the transformer and the railcar had their own crew of attendants, who made sure the load remained steady and stable throughout its journey.

From the beginnings of railroads in America, they were the “go to” form of transportation if you had a large piece of machinery or something very heavy to move. The railroads reached their zenith during World War II, when they had the greatest amount of track, which meant very large loads were moved just about anytime, anywhere. Even today, when a company needs to transport an especially large or heavy load, railroads still will get the nod if their tracks are anywhere close to the pick-up point or destination.

I became aware of this high-and-wide load as it was nearing Idaho by rail. On a nice Saturday morning in April 2011, I first caught sight of it near Dietrich, and followed it through Shoshone to its rail destination at a grain facility near Gooding. The transformer would be removed from its railcar and loaded onto a highway heavy-lift transport rig. It then would proceed from Gooding through Shoshone and down Highway 93 to the Idaho Power sub-station. 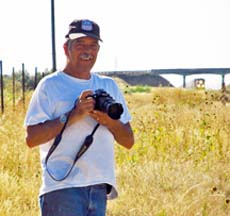 Robert Jenkins is a retired sailor and Vietnam veteran with twenty-one years of naval service. He moved to the Magic Valley five years ago, and now spends most of his free time photographing trains and wildlife while pursuing the history of the locales through which the trains traveled. He can be contacted at [email protected]
View all posts by Robert Jenkins →