Posted on by Doug Tims

Life on the Salmon’s Middle Fork with No Neighbors, No Phones

Campbell’s Ferry Ranch in the heart of what is now the Frank Church–River of No Return Wilderness is the setting of a new book of memoir and history by Doug Tims, an outfitter on the Middle of the Salmon River and the Selway River for twenty-seven years who bought the homestead. In the book, Merciless Eden, the author and his wife Phyllis, a retired dancer and dean of fine arts at the University of Utah, spend months at the cabin with no electricity, neighbors, or phones, and almost a hundred miles from the nearest store. Interspersed in this adventure is a tale of literary sleuthing, in which the couple gathers extensive personal and written histories of pioneer families who settled the remote place they now call home for half of each year. In the following excerpt, the two experience the culture shock of being completely alone in the wilderness, and begin to learn how to cope.

“Go confidently in the direction of your dreams.
Live the life you’ve imagined.”
—Henry David Thoreau

I’m a licensed pilot. I flew my own plane for sixteen years, but I was glad not to be at the controls as we made the approach for this landing. It is stunningly beautiful. And scary: mountain peaks, canyons, strong tricky winds, towering ponderosa pines and grand firs with a tight, short runway cut among them.

Ray Arnold, a veteran mountain pilot, was in the left seat, I was in the right, Phyllis in the rear seat of the single engine Cessna 206. We were coming from Cascade, had flown over 8,346-foot Chicken Peak and were looking down on two-and-a-half-million acres of the Frank Church–River of No Return Wilderness stretching for miles in all directions. It’s a mountainscape that has always attracted tough men and women. A lonely Eden, and, for some, a garden of agony.

At about three thousand feet, Ray banked the plane steeply and finally put us down on the eight-hundred-foot runway that sits on a sloping meadow above the river crossing called Campbell’s Ferry.

We thanked him, unloaded our twenty-odd boxes of gear and watched as the little plane clawed into the air headed straight for the canyon wall across the river. The plane banked left to find the deep canyon opening downriver, banked again to follow the narrow cut, rounded the bend at Lemhi Point and was gone, leaving only the sound of the Salmon River as it made its way past the historic homestead that would be our home. 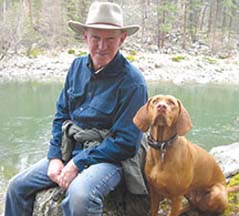 Doug Tims is chairman of the board and CEO of Maravia Corporation in Boise. Now semi-retired, he and wife Phyllis split their time between Campbell’s Ferry Ranch on the Salmon River and Tucson, Ariz. Doug has two daughters and five grandchildren living in Boise. His book, Merciless Eden, can be purchased through mercilesseden.com
View all posts by Doug Tims →