Posted on by Teri Torell Murrison

The Rancher as Obstacle Racer

I was standing in the Sun Valley Inn buffet line waiting to get roast beef at last year’s Idaho Cattle Association dinner when I saw Lance Pekus. My husband, The Professor, and I had begun following him a few years earlier on the sports entertainment show, American Ninja Warrior. Of course we had: he’s from Salmon and was competing on national TV, for heaven’s sakes. I knew it was him, because I recognized his muscles. And his hat. I asked for a picture (for The Professor, of course), and then for an interview. He said yes to both.

In case you aren’t aware, Lance is a rancher and the self-proclaimed Cowboy Ninja who has competed during five seasons of the TV show. The competition is a series of increasingly tough obstacle races held around the USA each year. There are four stages to the twenty-three-obstacle course. Stage One tests agility and speed, two tests strength and speed, three tests upper body and grip strength, and four is a climb up seventy-five feet of rope in thirty seconds or less.

Lance’s authenticity, grit, and talent have earned the respect of fellow competitors, TV hosts, and millions of viewers, but not the ultimate title of American Ninja Warrior (ANW) . . . yet. It’s no easy feat to become an ANW. Ask almost two dozen Olympians among thirty-five hundred men and a handful of women who have failed. Or ask the only two men in the show’s eight-year history to have completed the entire obstacle race course. Winning is not just tough, it’s darn near impossible, but Lance aims to be the next ANW anyway. 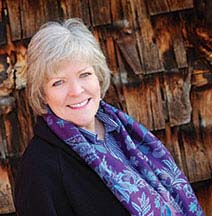 Teri Torell Murrison is a longtime writer for Adventure West and Range magazines and a lover of the West who considers herself crazy-blessed to live in Idaho with The Professor, four horses, three dogs, and with kids (and grandkids) nearby. Follow her on Facebook at Dispatches from Out West.
View all posts by Teri Torell Murrison →
ORDER BY MAIL