Cowboy Ron and a Trip to White Bird

The old cowboy stood along U.S. 95 with his thumb out. He was dressed in clean ostrich-skin cowboy boots, jeans, brown leather jacket, and a large Stetson. He looked a bit weathered and worn, but not defeated. Oddly, he grasped the handle of a wheeled airline carry-on bag. I was driving southbound leaving Pullman, Washington, and headed toward Lewiston. My sister’s dog Piper was in the back of the car. The morning sun was bright and starting to warm up.

I pulled over to let him in.

“Where you headed?” I asked as he opened the door.

“Colorado,” was his reply.

“You’ve got a ways to go. I can get you thirty miles down the road to Lewiston.”

“I would be much obliged.”  He put his bag in the back seat and climbed in. His leather jacket had snap closures down the front, each snap etched with a rider on a bucking bronco.

“I haven’t hitchhiked in fifty years.”

“Yeah, well, I’ve done it a few times myself not so long ago.”

We sped up and headed out of town through the rolling Palouse Hills. Winter wheat emerging from most of the hills was a lush green.

“This is not your best way to get to Colorado, but at least there’s only one road between here and Boise.”

“Yeah, that’s what the state trooper told me up in Spokane. He busted me for hitchhiking on I-90. Then he dropped me off on this road. I figured I could go due south clear to Winnemucca, then head east to Colorado from there. So far it’s been going pretty slow. I slept in a barn last night, and just now I had to walk all the way through Pullman wearing these cowboy boots.”

“There’s going to be a lot of desert to cross going to Winnemucca. You’ve got quite a trek ahead of you either way. How’d you end up out here afoot?” 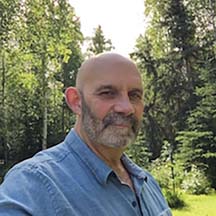 James J. Pizzadili is originally from Delaware and studied Forestry at the University of Idaho. His background includes wildland firefighting for the U.S. Forest Service and BLM, timber cruising and logging, and working in the Bering Sea crab fleet. Since 1993, he has been saving lives as a doctor of chiropractic in Anchorage, Alaska.
View all posts by James J. Pizzadili →
ORDER BY MAIL